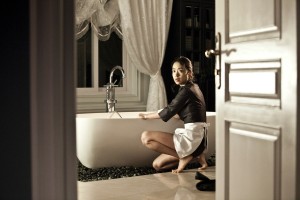 Could Clint Eastwood’s planned remake of “A Star Is Born” with Beyonce Knowles, a fourth or fifth version of the same story, make “remake” less of a dirty word in our culture? Probably not, especially after critics were blind to the moody, sad middle-school terror of 2010’s “Let Me In,” discounted as being too soon after the spectral chill of the original, Let the Right One In” (2008). As for “The Housemaid,” Im Sang-soo’s hosannaed 2010 Cannes entry, a refashioning of Ki-young Kim’s 1960 South Korean classic black-and-white noir, “Hanyo,” it’ll sail right by journalistic condescension because of the original’s near-invisibility to all but devoted Asian film scholars and admirers. Plus the fact that the latest version is a seductive narrative that doesn’t pull its bravura melodramatic punches, even at the baroque end, doesn’t hurt at all. It honors the notion of the lovingly lurid genre of the erotic thriller. An innocent young nanny, Eun-yi (Do-yeon Jeon), is the fulcrum for the power battles of a super-rich household, forced to become the mistress of Hoon (Jung-Jae Lee), the master, and the pawn, in different ways, of his vicious mother, his pregnant wife, his young daughter and the eldest of the housemaids (a “maid to the bone,” in Im’s words). What a dreadful, venal, damaged bunch of keepers of wicked privilege! Elegant Hitchcockian sneakiness dances off the surface of class conflict, and while Im is restrained once the tables are turned, unlike some of his more gleefully bloody or weird countrymen, punishment arrives with panache. The casual frankness of Im’s 1998 “Girls’ Night Out,” which already showed a fascination with the dynamics of female interpersonal relationships, blooms into something much more sinister and chilly. There are sufficient perverse curves and curlicues to make you imagine Brian De Palma in a film-festival audience somewhere, smiling like a ghoul in a Charles Addams drawing. Jeon Do-yeon (also in “Secret Sunshine,” shown at Siskel in January) took best actress honors at Cannes. 106m. (Ray Pride)

“The Housemaid” opens Friday at the Music Box.