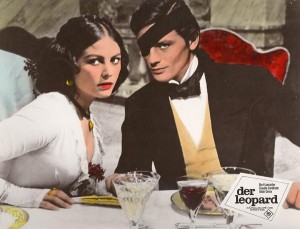 (Il gattopardo) One of Luchino Visconti’s many masterpieces, “The Leopard” (1963) was restored only a few years ago to its three-hour-plus original Italian-language release version, and it’s the kind of movie that deserves to be seen in luminous big-screen glory. This release is of a new 35mm print, restored under the guidance of Martin Scorsese and cinematographer Giuseppe Rotunno. Scorsese is characteristically understated: “One of the greatest visual experiences in cinema.”  “The Leopard,” a magnificent epic about the mid-nineteenth-century decline of the Italian aristocracy as nationalism began to rear its head moves with magisterial grace. It also boasts one of Burt Lancaster’s greatest performances—aware, sardonic, bittersweet—as the patriarch who knows it’s all going away. (Plus his exclamation, “Marriage! A year of fire and forty years of ashes!) Italian-American directors such as Coppola, Scorsese and Cimino drank deep at the fount of “The Leopard” (as well as another of his great movies, “Rocco and His Brothers”)—note the stateliness of passages of “The Godfather,” the dance scenes in “Heaven’s Gate”; the battle scenes that open “The Leopard” and “Gangs of New York,” for instance. But the climactic ball scene, forty-five minutes of painstaking detail, is the aristocrat Visconti’s great masterstroke: we know the characters, the stakes, the future, and each movement of the dance tells us more about mortality than most of us dare face. With Alain Delon and Claudia Cardinale, who has one of the great entrance scenes of all cinema. Rotunno, in opulent interiors, or gorgeous, cruel landscapes, works marvels with light. 185m. (Ray Pride)

“The Leopard” plays Friday-Monday and Wednesday at Siskel.