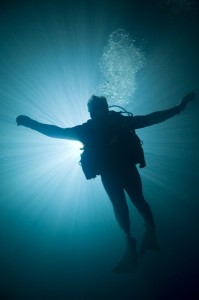 Resist guessing this deadly cave-diving adventure is a rebreathing of “Descent.” There are no lost tribes of gilled albinos, nor leftover aliens from “Abyss,” or nasty indigenous species from “The Ruins” inhabiting “The Mother of All Caves” in Papua, New Guinea. That’s where producer-co-writer Andrew Wight, and co-writer (and dive coordinator) John Garvin set their “Sanctum.” Australian diver Wight draws on the 1988 escape of his twenty-two-member team from Pannikin Cave in Nullarbor Plain, which lead him to produce the documentary “Nullarbor Dreaming.” Shooting off the Queensland coast, Alister Grierson (“Kokoda”) directs this fictional version spiked with six deaths. The 3-D technology is the same that James Cameron deployed on “Avatar.” Wight earlier worked with Cameron, one of “Sanctum”‘s executive producers, on four underwater documentaries. Here some over-the-shoulder shots in above-ground scenes jar with extreme foregrounding. In the press notes, Garvin and Wight say they don’t want us to see them using 3-D, which seems to make it useless. On day thirty-four of an underwater speleological expedition, a big rain floods a big cave. The only way out is an underground river flowing into the Pacific Ocean, if only the survivors can find it before they run out of oxygen, suffer blood “fizz” from nitrogen narcosis, panic in tight passages, or get back-stabbed by a billionaire with stalagmites. The story is less eventful than “Touching the Void” or “The Way Out,” two other nature escape narratives. 17-year-old Josh (Rhys Wakefield) will discover his dad, master diver Frank (Richard Roxburgh), is not just “an emotionally shut-down Nazi asshole.” The old man has a life-and-death skill set to pass along. With Alice Parkinson, Dan Wyllie, Ioan Gruffudd, Christopher Baker, Nicole Downs, Allison Cratchley. 103m. (Bill Stamets)