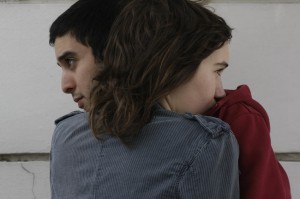 What’s in a title? While Oscar contenders linger in the theaters, “Rapunzel” is only a couple of weeks away from grossing over $200,000,000 in the U.S. and Canada.

Oh, wait. It’s “Tangled”—not “Rapunzel.” The studio made a mid-course correction in the content and title of its movie, fearing the all-powerful Boy. An adventure about a Girl? No, thanks, dude. One of the season’s most gratifying successes at the box office is the Coen brothers’ most successful film yet, “True Grit,” which has passed $150,000,000. Yes, it’s an adventure about a girl, but even in the Oscar race, Hailee Steinfeld, who plays the lead of the film, the bossy, obstinate, fierce, willful Mattie Ross, is nominated in the “Best Supporting Actress” category.

Still, studios gamble on stories with strong younger women. Focus Features has placed a modest bet on Joe Wright’s comic-booky “Hanna,” with two strong girls in the international trailer, at least—Jessica Barden, eyes-wide and manic again as she was in “Tamara Drewe,” even if the center of the 1960s-styled killer-thriller is young Saoirse Ronan, the angry marvel in the midst of “Atonement.” It looks to be “Kick-Ass” with grown-up eye candy (and Cate Blanchett as a secret agent!).

But are there movies that not only feature young actresses but take modern situations seriously? Two long-delayed smaller movies open this week in Chicago, both with delicate, deliberate performances at their core, Bradley Rust Gray’s “The Exploding Girl” and Bruno Dumont’s “Hadewijch.” In Gray’s movie, Zoe Kazan plays Ivy, a woman on break from college, reserved, given to quietly depressive moods. She’s epileptic, and works to stay calm. As with “In Between Days” (2006), the debut feature by his wife and filmmaking partner So Yong Kim, Gray observes a willfully inarticulate character who doesn’t have any answers yet, and probably hasn’t formulated the right questions about life. And Kazan, near-still, sometimes tremulous, watching, awaiting, wondering. It’s a concentrated performance of merely being. Gray, shooting in digital video, often shoots from a great distance, such as in a scene along New York’s Houston Street and Kazan’s body language and the whir and churn of traffic filtering onto the soundtrack indicate as much as any dialogue might. New York shimmers as Ivy simmers.

In the latest film by the French director Bruno Dumont (“Life of Jesus,” “Humanité,” “Twentynine Palms”), released internationally in 2009, Julie Sokolowski plays a Christian novice, Sister Hadewijch, whose suffering and self-mortification is too extreme for the older nuns, and is cast out, back into her life in Paris, as a privileged girl named Céline. Sokolowski is pallid yet fierce in her ordinariness, whether in the wet, cold rural retreat or the more posh, palatial urban setting. Her father is a diplomat or minister, and they live in the kind of high-ceiling digs that would be an ideal setting for a Peter Greenaway film rife with slicing, slaughter and grue. Céline discovers boys, in the form of an Arab her age, but she can’t love or be in love, there’s only Christ for that. She’s gone from monastery to city, but there will be another transition, from faith in Christ to the exploration of other beliefs, and soon another city, another country, where acts of terrorism burst abruptly. Dumont shoots in 35mm, and his attention to his young actress’ features is telling, where the slightest flicker of light or shadow suggests the possibility of inner illumination; a late scene near the retreat features a sudden ray of light on a distant hill that is miraculously simple, and a simple miracle.

Talking to Filmmaker magazine last December, Dumont said something about his work that applies as well to Gray’s: “I’m very interested in forms of mysticism. I think mysticism is essentially cinematographic. It’s present in my form of expression, it’s a vision that is very rich and something that I think has a lot in common with cinema. In fact, I think that mystical experience helps me understand cinema better. When you’re approaching mysticism, then you’re dealing with something that has nothing to do with the rational, logical mind. It reaches zones or areas touching on ecstasy, ecstatic experiences that I find absolutely astonishing.”

The title of Gray’s film alludes to “In Between Days,” a song by the Cure whose B-side was “The Exploding Boy.” An in-joke between a talented filmmaking couple, but a cryptic title. “Hadewijch” refers to an ancient mystic, and sounds antiquarian and distant in only a couple of syllables. Either could have been titled “Tangled,” too. Their characters are tangled up in something more than plot complication: the ecstacy of finding the sensation of merely, simply, miraculously, being alive.