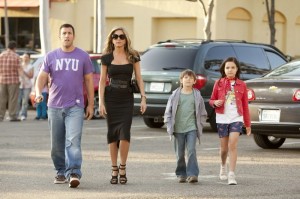 Adam Sandler returns to Hawaii, where his characters went on “50 First Dates” and fell into “Punch Drunk Love,” for a peculiarly bad extrusion of his brand. Here he plays Danny, a plastic surgeon in Los Angeles who calls breasts “fun bags.” In 1988 he fled his wedding on Long Island, went to a bar wearing his ring, got lucky that night and got more luck ever after. But when he meets Palmer (Brooklyn Decker) and wants to marry for real, his “fake wife” ploy backfires. Palmer insists on meeting his supposedly soon-to-be-ex and their two kids. Danny recruits his divorced office manager Katherine (Jennifer Aniston) and her son and daughter to fake out Palmer. Going through the motions leads to real emotions. Sandler and Aniston work well in several scenes, but the screenplay by Allan Loeb and Timothy Dowling is a mess badly directed by Dennis Dugan (“Grown Ups” and four other Sandler comedies). The source is the 1965 Broadway play “Cactus Flower” that had a ten-month run at the Blackstone Theatre in 1968. Walter Matthau and Ingrid Bergman played the leads in the 1969 film version. Warning: the score is overloaded with samplings of Sting. With Kevin Nealon, Nicole Kidman, Nick Swardson, Dave Matthews, Bailee Madison, Griffin Gluck. 116m. (Bill Stamets)