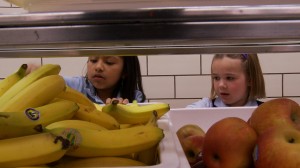 America’s consumption habits are thoroughly documented, studied, analyzed and satirized. The whole world knows we have a problem but no one seems to have a solution. “Lunch Line,” a documentary film by local directors Michael Graziano and Ernie Park, searches for one in the institution that feeds millions of Americans daily: our public schools.

“There should be a veggie garden in every school,” insists Greg Christian, founder of Chicago’s Organic School Project and inspiration for “Lunch Line.” There needs to be “more food made from scratch,” he goes on to explain. Christian, who has been working on National School Lunch Program reform for six years now, has a plan to remedy America’s struggle with nutrition. But what’s stopping this food revolution? A long history of bureaucratic disagreement and a lack of incentive by the USDA are two of the culprits.

“Lunch Line” explores the history of food served in schools, the relationship our government has with agribusiness and how this money-driven affinity determines what the youth of America is fed and, ultimately, how unhealthy they will live. The tale of our country’s nutritional struggles is presented alongside the efforts of six Chicago high-school students on a mission to improve the food in their cafeteria.

The issue has particularly taken root with the parents of Nettelhorst School, a CPS Magnet Cluster school in East Lakeview. In order to bring this debate to the fore, the parent-led Nettelhorst Community Group has organized a screening of “Lunch Line.” Parent and member of the Nettelhorst Community Group Aaron Spevacek stresses the importance of the issue, saying “school nutrition is at this nexus of the connected issues of hunger and obesity, and school lunches sit right in the middle.”

The screening will be followed by a panel discussion, which will be joined by co-directors Graziano and Park; Greg Christian; Robert Bloomer of Chartwells-Thompson Hospitality (which provides food in all CPS schools); Dan Schnitzer, Director of Sustainability for the Academy for Global Citizenship and Dr. Susan Kurland, co-author, “How to Walk to School.”

While there are many problems facing the system today, Graziano looks to the history of the school lunch program as reason to believe they can be resolved: “the fact that there is a school lunch program is a testament to the possibility of compromise.” (Tiana Olewnick and David Wicik)