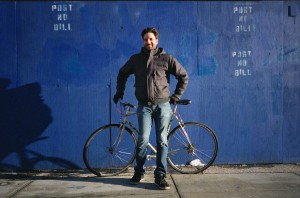 As the first brush of warm weather tempts Chicagoans out of their dens, a film festival celebrating bikes and riders returns to town starting February 25 to touch off the cycling season. The Bicycle Film Festival (bicyclefilmfestival.com) rings in its tenth anniversary with a bevy of films showcasing all things bicycle, from urban cycling to bike polo to BMX. The festival’s director, Brendt Barbur, created the event as a way to champion the urban bicycling movement after getting hit by a bus while riding his bike in 2000. Since then the festival has toured more than thirty cities from Taipei to Toronto, drawing more than 300,000 participants annually. The Viaduct Theater plays host to this year’s incarnation, screening some forty films. Highlights include “The Birth of Big Air,” a Spike Jonze-produced documentary about the triumphs and tribulations of legendary BMX biker Mat Hoffman; “Lucas Brunelle: Line of Sight,” which brings hair-raising urban cycling to the screen with helmet-cam footage of urban biking icon Lucas Brunelle’s adventures; and “Riding the Long White Cloud,” about a group of professional skateboarders who cycle around New Zealand’s beautiful North Island camping and skating as they go. Parties at Beauty Bar and Darkroom bookend the fest with music provided by DJs Pogo, Arturo and DJ Brad Owen. There’s even a free bike valet at all screenings courtesy of Active Transportation Alliance. Barbur says the festival offers a glimpse into “a biking movement that is rapidly emerging all around the world.” But non-bikers are welcome too. “People might think that BFF is just for bikers, but the films are strong on their own. It’s all about having a good time, and it’s okay to drive a car to the festival.” (Benjamin Rossi)