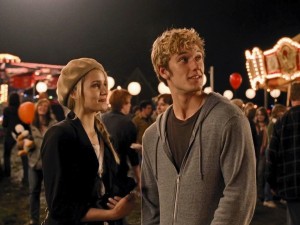 The lightly likeable “I Am Number Four” may also be a breath mint, but I didn’t double-check to be sure.

It’s at least two, two different, media enterprises. The teen-out-of-place adventure is the first feature from the newly constituted DreamWorks Pictures, released through Disney’s Touchstone label, and co-financed by India’s Reliance Big Entertainment. It’s also the first fruit of Full Fathom Five, the young-adult novel forge fronted by James Frey. Frey may be best known for offending the ready-to-be-offended Oprah Winfrey, after her endorsement of his extremely fictionalized memoir of addiction and recovery, “A Million Little Pieces,” which is cheekily, implausibly melodramatic from its very first pages. After lying low for a bit, and publishing another novel under his name, the irrepressible Frey came up with a bold idea in the wake of novel series like the “Harry Potter” books and the “Twilight” tales. Why not trawl the ranks of underemployed graduate students who have paid a fortune to “learn” how to write and take them for another spin? They would propose stories that would be published under a pseudonym, and for which they could never take public credit, all in the “young adult” genre, all of which would hit the “beats” of a Hollywood studio screenplay, that would ideally lever both best-selling series of books and box-office-busting series of movies. (As in the studio system, most profits would accrue to the manufacturer, and not the writer.)

Enter “Pittacus Lore,” enter “I Am Number Four.” “Four” is a fictional memoir of a teenage alien, whose momentary identity is “John Smith,” who’s battened from school to school across the U.S. as he gains powers with age and tries to meet the other survivors of his planet’s destruction, who together will avenge the death of their kind at the hands of another set of strange invaders, face-tattooed weirdos in the customary black longcoats, bearing the customary heavy interplanetary artillery. A writer named Jobie Hughes has been identified as the originator of the text that Frey then ushered onto the pop-cult stage, and the screenplay was adapted by Alfred Gough and Miles Millar, no strangers to origin tales as writers of television’s “Smallville” and by Marti Noxon, a writer on “Buffy the Vampire Slayer.” (Fragments of other narratives, like “Starman” and “The Prisoner,” and a PG-13 rendition of a weapon from “Phantasm,” fall like paper snowflakes onto the story’s pages.)

If it weren’t for the commercial for J. J. Abrams’ “Super 8” that ran during the Super Bowl, “I Am Number Four” would be the most Spielberg-looking of not-Spielberg films produced under Steven Spielberg’s supervision so far this year. That little dab of “Close Encounters of the Third Kind” will likely surpass director D. J. Caruso’s achievement here, but 20-year-old star Alex Pettyfer, the most thirty-looking of 30-year-old-looking actors to play a high-school student in memory, told the Los Angeles Times this week that “Close Encounters” was one of two influences Caruso had him study, the other being James Dean’s cocksure confoundment in “Rebel Without a Cause.” Caruso’s credits include the Shia LaBeouf-starrers “Disturbia” and “Eagle Eye.” One of the most amusing signifiers of his possible consideration for Caruso as emerging “auteur” is Timothy Olyphant’s turn as Henri, Number Four’s protector, lank hair whitened, cheeks bristled with salt, in a deeply accurate impersonation of LaBeouf’s “Eagle Eye” co-star, Billy Bob Thornton. (At the moment, Olyphant looks younger than Pettyfer, despite the Billy Bob-style un-prettification.)

There are bullies and geeks, oh my, and watchful aliens that take the comforting form of beagle dogs. While pretty-pretty Pettyfer is amiable company, he’s still playing the role of the anguished loser, as if he were LaBeouf in male-model form. There’s also a love interest, a budding photographer played by Dianna Agron, who’s apparently from a television obscurity called “Glee.” There are shots of the pair, beaming at each other in anticipation of an interspecies smooch, that are plain-pretty goodness, each with a matching bump in their beaks. Sarah gets a perfectly proportioned Lois Lane moment—and Agron may well have been cast for the possibility of that single look—when she realizes just how different John Smith is, and bemused pleasure lights up her young, fearless face.

While largely set in Ohio, and partially in the last high-school darkroom on the face of the nation, and the kind of county fair only seen in movies, shot in Pennsylvania towns that could pass for the backlot sets of “Back to the Future,” at intersections with names like McKinley and Grant, “I Am Number Four” gratifyingly avoids most pop-culture jokes and only a couple of U.S. flags wave in a cemetery-set scene, leaving one “My entire life has been an episode of ‘X-Files'” to do the trick.

An extended, pro forma ending winds up being weirdly, satisfyingly redemptive, and of course opens onto other sunrises, other battles, other days and nights of furious battling as the Full Fathom Five loom.

“I Am Number Four” opens Friday.