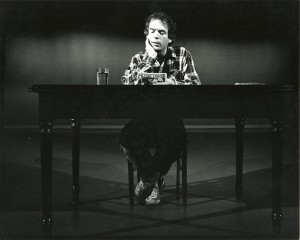 In “And Everything Is Going Fine,” monologist Spalding Gray narrates his life from beyond the grave in Steven Soderbergh’s inspired collage. Soderbergh had collaborated with Gray on the monologue film “Gray’s Anatomy” (1996), about the writer’s failing vision, as well as directing one of the most convincingly grim portraits of a despairingly doomed writer in “King of the Hill” (1993). Gray died in 2004, a likely suicide off a ferry after an earlier accident had damaged his lucid, limber memory. Soderbergh’s knack for fluid, inventive editing serves him well in this refined narrative, drawn from a reported ninety hours of original footage. Gray said he was dyslexic, and had said he remembered the previous telling when he performed more than he would recall a set text or consult his familiar notebooks or a tall clear glass of water. In its accomplished form, “And Everything…” replicates that organic palimpsest that existed only in the unique formations of one man’s brain. And not to forget, what a funny guy. What an observant man. What an estimable artist. Soderbergh didn’t carve a monument: he finished a sentence. Or, rather, allows Gray to finish his many sentences: he’s the sole narrator, his solitary subject, in this final version of all his tale-telling and truth-digging. The ending “lamentation” is discovered, found, observed, and perfect—the hearing of a kindred spirit. (89m. HDCAM video.) (Ray Pride)

“And Everything Is Going Fine” opens Friday at Siskel.