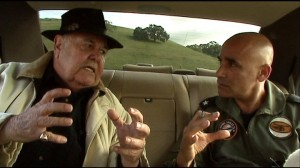 A Winters of discontent. Jonathan Winters is one of the reigning brains of American comedic synaptic wonderment, a man whose mind crackles with an electricity as unexpected as Tesla’s waves. (He does Ohio proud as Johnny Carson did Nebraska.) Now, a few years after the shooting of “Certifiably Jonathan” (2007), Winters is 85 and has suffered years of intermittent ups and downs, which he has made as public as his unstoppable sense of humor. While there are comic’s comics like Tim Conway, whose antics off-screen and off-stage are legend in comedians’ late-night conversations, Winters is what you see. Sadly, what you get in Jim Pasternak’s mock-documentary is not a showcase for the mad marvels of his mind, but for a rickety conceit that has Winters craving a showing of his paintings in the Museum of Modern Art after local gallery shows go bust. Pals flock, including the ubiquitous, unknown director, Nora Dunn, Sarah Silverman, Jimmy Kimmel, Robert Klein, Jeffrey Tambor, Conway, Howie Mandel and Rob Reiner (a surfeit of shiny pates there). Winters, without doubt, is a genius, his timing undiminished even in his eighties, but capable of error, as every minute of this insufferable padded cell proves, even with archive footage ladled on. (When the Rajah of film returns from sabbatical for his next century of rule, let’s all remind him that the “mock-doc” is now and for the foreseeable future to be cast out with the rest of the bad fish.) 71m. HDCAM video. (Ray Pride)