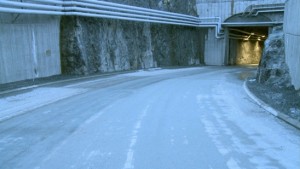 Waking up to watch a review DVD the other morning, for just a second I struggled to recall just how much of the electrical grid surrounding Lake Michigan is nuclear-powered, and let the thought pass, like anytime it arises, as the screen flickered to light. An infinitesimal particle of radioactive waste made, forgotten. A flicker of thought, passed. Danish director Michael Madsen’s stoic, philosophically inclined “Into Eternity” doesn’t forget as it ventures into the Finnish countryside to Onkalo, or “hiding place,” a site where nuclear waste must last 100,000 years, twenty times longer than the Pyramids have stood. Begun in the twentieth century, set for completion in the twenty-second, Onkalo is an impossible and deathly venture. Steely, cool, restrained, ever-so-overarching in its fearfulness, “Into Eternity” is as refined and elegant as a representation of the human skull. “You should not have come here,” Madsen, a conceptual artist, addresses. “You are heading towards a place where you should never go. Please turn around and never come back. There is nothing here for you. Go no further.” Onkalo may be unmarked, in the hope that it will be forgotten, never to be found again. These are the kinds of concepts the subjects ponder. Addressing the future is good, when the present does not listen, capturing the otherworldliness of the world we have made. (Inside the walls, electricity awaits its charge.) 75m. (Ray Pride)

“Into Eternity” plays Friday 8pm at Chicago Filmmakers, 5243 North Clark. A trailer is below.