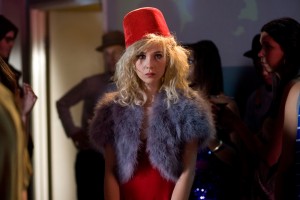 Everyone’s young and precisely pretty, no one’s old in Gregg Araki’s B-movie-plus, “Kaboom,” luminously shot in Jell-O-shot-colored colors, elevating polymorphous ambisexuality at its most playful and, even, comfortingly innocent, as well as being kidnapping-, murder- and UFO-obsessed. It’s both compact self-satire and fizzy simulacrum, a “petite little snack,” to recall a phallic appellation from an earlier film. A compact greatest hits of the timeless, well, 1990s-inflected Araki-verse, “Kaboom” follows in the tradition of his “Teen Apocalypse Trilogy,”  “Totally Fucked Up,” “Nowhere” and especially “The Doom Generation.” Encouraged by John Waters to explore the snap of his earlier pop without too much regression, Araki grafts a “Twin Peaks”-ish paranoid mystery atop a tale of prototypical freshman year terror, with a wall-to-wall score that includes songs by Cut Copy, Explosions in the Sky, Ladytron, Tears Run Rings, Interpol, Airiel, The Pains of Being Pure at Heart and Yeah Yeah Yeahs. Quiet, understated, mewly Smith (Thomas Dekker) is ready for the worst, starting with his roommate, man-wrestling surfer and shameless autofellatio practitioner Thor (Chris Zylka) (“Thor, like the comic, yeah!”), the dangerous loves of his lesbian female best friend Stella (Haley Bennett) and tiny, teasing London (pert, particular Juno Temple). It’s his happening and it freaks him out. “What’s that guy’s deal, he’s gotta be 30 at least,” pens the 51-year-old writer-director. There’s a Russ Meyer-style vigor to the characters’ lithe bi-ness, and a familiar sound is the relentless ring of Araki-rama dialogue: “The guy sounds like a fucking asstard”; “Dude, it’s a vagina, not a bowl of spaghetti”; and Stella’s reassuring “Wow, next to putting a dick in your mouth with Lady Gaga playing in the background that’s about as gay as it gets… Smith, I’m kidding.” The campus is a timeless nowhere: the student café sign reads: “Welcome to the Ontological Void.” Hallucinogenic cookies motor the tale, much as it sent Anna Faris on her pilgrim’s journey in “Smiley Face.” “Super-hot in an edgy, super-bitter kind of way,” another character auto-critiques the film. The extreme minimalism of locations works expressively in an “Alphaville”-futurist fashion, and early 1980s-era film school-type references are rife, including a lovely shot of an airplane crossing the moon, which evokes Buñuel’s “Un chien Andalou” (reinforced by a later reference). Call it spiked-punch-drunk love. With Kelly Lynch and James Duval as “The Messiah.” 86m. 2.35 Widescreen. (Ray Pride)