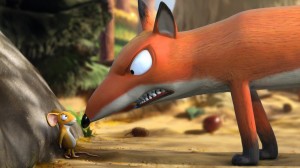 Pixar’s playful “Day & Night,” which was the opener for “Toy Story 3,” is one of the two best of this quintet, directed by Teddy Newton, a conceptual coup, a hand-drawn treat after the fashion of late caricaturist Al Hirschfeld that in its first iteration exploited 3-D to rich result. The teach-it-to-kids CGI “The Gruffalo,” about a nut-hunting mouse in the woods who faces a fox, an owl and a snake, repeats itself, but at least boasts narration by Helena Bonham Carter. From the U.S., Geefwee Boedoe’s “Let’s Pollute,” a salute to all-American waste keeping the economy strong, is a keen parody of stentorian educational films. (Boedoe designed the title sequence of “Monsters, Inc.”) “The Lost Thing,” an Australian short about a boy’s hope for a home for a weird creature he comes across on the beach while scavenging for bottle tops has a grown-up absurdity and sadness, largely from explaining neither beast nor boy. Perhaps best in its sculptural form and dimensional delight is “Carnet de Voyage,” a travel diary in scrapbook form that comes to life as a European who encounters the traditions of Madagascar’s Malagasy people. Bonus shorts include Bill Plympton’s “The Cow Who Wanted To Be A Hamburger.” 85m. (Ray Pride)