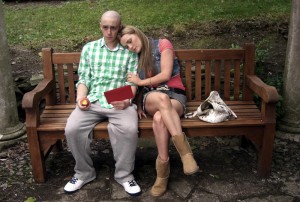 Boys! From the UK, “The Confession,” a quiet 9-year-old’s fear of his first confession is a neatly observed slice of boy’s life about guilt and temptation that suggests Tanel Toom has a commercial career in the immediate offing. From Ireland, “The Crush,” features an 8-year-old boy (played by director Michael Creagh’s son) challenging his second-grade school teacher’s boyfriend to a duel to the death in a punchline much shorter than the short. “Wish 143,” from the UK, in which a dying 15-year-old boy asks for a wish from a charity, shows tact and skill in evading sentimentality while noting that the desire for an hour with a naked woman beats Disney World any day of  life. Belgium’s “Na Wewe,” boasts feature-level production values, as well as feature-length thematic confusion like many a movie in its political and satirical ambition. Luke Matheny’s black-and-white “God of Love,” working from the conceit of a magic packet of darts that can cause anyone to fall in love for a few short hours, shows good humor and admirable charm with modest means. It’s beaming and brimming with pleasure. 106m. (Ray Pride)