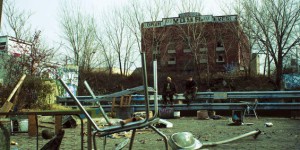 What is so wrong with a message in a bottle? “Experiment supervisor” Vladan Nikolic’s “Zenith” is a feature film surrounded by messages in bottles, approaching its desired status as “a retro-futuristic stem-punk thriller” in the vein of Philip K. Dick and Terry Gilliam in a “transmedia” approach with additional online content and suggestive promotional materials. But the film itself is sufficiently inventive and imaginative to cut through that thicket of messages and bottles: on hardly a budget at all, this jam-packed conceptual agglomeration works on the knife-edge of what Ridley Scott and company were onto with “Blade Runner.” What decay will encrust the edifices of tomorrow’s unseen histories? What becomes of the mind when knowledge is compacted instead of explicated? When happiness comes from medication but not meditation? Shot in disused and rundown reaches of New York City boroughs, “Zenith” is an impressive and certainly downbeat dystopia built from found locations, insistent hypotheses and studded with superlative acting, termite performances from gifted actors playing paranoids and conspiracists with unbridled glee. With Jason Robards III, Peter Scanavino. Some transmedia material is at zeniththefilm.com. 93m. (Ray Pride)