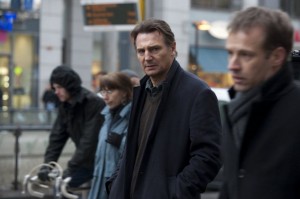 If the leading cause of screen death for assassins is other assassins, the most common non-lethal ailment for their agent colleagues is amnesia, as we see in “The Bourne Identity,” “The Long Kiss Goodnight” and now, “Unknown.” In “Taken” (2009) Liam Neeson played an ex-CIA agent who wreaked havoc in Paris to extract his daughter from the posh yacht of a Middle Eastern pervert. Now it’s Berlin’s turn to endure collateral mayhem as Neeson plays Dr. Martin Harris from New Hampshire. He must extract himself from an intellectual-property heist (156 laptop files “worth billions in the wrong hands”) and the assassination of a Middle Eastern playboy and philanthropist. Bruno Ganz (“Downfall”) plays an ex-Stasi agent who helps our hero find himself. His other helpmate is a Bosnian taxi driver played by Diane Kruger. Screenwriters Oliver Butcher and Stephen Cornwell, working from a novel by Didier van Cauwelaert, help the historically illiterate with background briefings on the former Yugoslavia and the former East Germany. An American couple (Neeson and January Jones) check into the Hotel Adlon for a tenth annual biotech “summit.” The plot promptly detours Harris into a four-day coma. His memory is shaken and his identity is taken. This who-am-I? thriller creaks with dumb mechanics. Director Jaume Collet-Serra did far better in “Orphan,” where hypopituitarism took the place of amnesia, and the Saarne Institute, not Section 15, was where the wrong-doers originated. “Unknown” is watchable escapism with a corny finale of global proportions for popcorn concessions. With Aidan Quinn, Frank Langella, Sebastian Koch, Olivier Schneider, Stipe Erceg. 109m. (Bill Stamets)