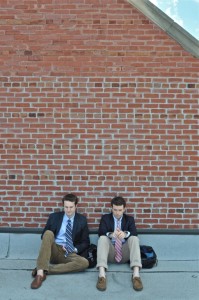 The historic Portage Theater is dressed to the nines for a very special premiere tonight, bringing a little bit of Hollywood to Chicago’s Northwest Side. Tonight sees the debut screening of Chicago writer/director Matt Helderman’s film, “The Alumni Chapter,” a story about four friends trying to move on with their lives after college. The film, Helderman’s first feature, bears the caveat that it was originally conceived of and written while Helderman was still an undergrad at Lake Forest College.

Walking into the theater, your first stop, as with any properly exclusive affair, is a name check. Inside, the lobby is packed with people in all manner of evening wear, from groups of film students more casually attired in sport coats and blouses, to the Chicago indie-film cognoscenti sporting sveltely cut black suits and sharply profiled sheath dresses. One man, who looked to be a Marine Corps officer, came in full dress uniform including such a dazzling array of hardware on his chest as to be easily mistaken, given the context, for a character in the film.

The theater’s concession stand has been transfigured into a cocktail bar and, throughout, crowd members carry ubiquitous plastic tumblers filled with vodka or whiskey and mix. Clustered around the impromptu photo wall, the cast and crew mull over future creative projects with Cape Cods in hand. One of the film’s stars can be overheard recounting the events of a recent ski trip.

Before long, however, the crowd begins to slowly filter into the Portage Theater’s opulent screening hall. The room is a massive example of prewar beaux-arts design complete with garlanded architectural details on the ceiling and imposing brass grills to either side of the stage; a setting fully equal to a debut of any size. 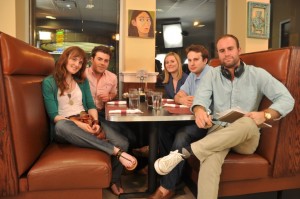 The filmmaker and his cast

“Are you ready for the ‘St. Elmo’s Fire’ of the twenty-first century?” asks Marla Seidell, the film’s publicist (and Newcity contributor), once everyone has taken their seats. The curtain is drawn and the opening credits read on what appear to be bits of torn off notebook paper. As each name appears, whoops of applause resound, reflecting the strong friends-and-family contingent in the audience.

While “The Alumni Chapter” may not have the sort of canned kookiness as the Schumacher classic, it certainly tells a very familiar story. In fact, the “write what you know” doctrine has made such coming-of-age stories nearly de facto first works for up-and-coming writers, making it hard to make something truly original. Helderman sees his film as an update of those stories that influenced him for the post-crash, post-grad world.

“Each generation is faced with similar problems, just in a different time period. I moved my characters into the setting that I had essentially been living in and stylized it around the platform that the economy had changed, that the world had obviously changed, moving in a very unsure direction where the workforce, new graduates and education means something much different than it used to.”

From here, Helderman expects to roll out the red carpet for a similar New York premiere of his film and is also submitting it to some twenty film festivals. And then Helderman will have to do like his characters: leave behind the world of academia in order to write the pages of his own alumni chapter. (David Wicik)