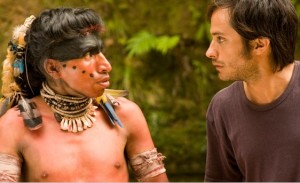 An opening credit, “In Memory Of Howard Zinn,” indicates that in Spain’s official entry for the Best Foreign Language Oscar (but which did not make the final five), “Even The Rain” (También la Lluvia), politics will be more central to the story than “Take My Eyes,” director Icíar Bollain’s tender, bruised 2003 melodrama. Set in 2000, “Enter The Rain” alternates the story of seemingly idealistic young director Sebastian (Gael Garcia Bernal) and seemingly cynical older producer Costa (Luis Tosar, “Take My Eyes”), who are preparing a historical pageant about the arrival of Christopher Columbus as cheaply as they can, using indigenous Bolivians to tell their story. But coinciding with their production is the privatization of every last drop of the local water supply by a multinational, under which terms the locals are forbidden to collect water, “even the rain.” (The story based on actual events.) The script, by Paul Laverty (“My Name Is Joe,” “The Wind That Shakes The Barley”), a frequent collaborator of Ken Loach, brings the parallel narratives to a fine, forceful point. Which force of capital is more exploitive, more coercive? Paralleling the epic images “that will last forever” and the documentary-inflected images of urban conflict in Cochabamba, the country’s third-largest city, is visually compelling. As the watchful director, Bernal is fine, but the shaven-headed Tosar is the amoral center of the film: can he believe what he sees with his own eyes? Juan Carlos Aduviri is also stirring as Daniel, the anti-corporate rebel who has been cast in a central role in the film production. The last line and the final, coursing image are modestly brilliant. With the past two months’ rebellions across the Middle East and Northern Africa, this fierce, telling drama could not be timelier. “The memory of oppressed people cannot be taken away, for such people revolt is always an inch below the surface,” Zinn wrote. Hello, Zine El Abidine Ben Ali…. Hosni Mubarak… Muammar Gaddafi… 103m. (Ray Pride)

“Even The Rain” opens Friday at Landmark Century. A trailer is below.