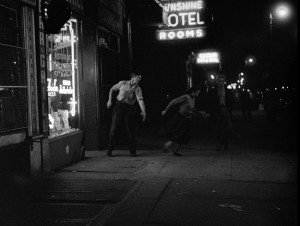 A glistening landmark of the down-at-hell past of an only-just-gentrifucked patch of Manhattan, Lionel Rogosin’s 1957 “On The Bowery” is an outright masterpiece of urban ethnography and observant compassion. “A milestone in American cinema” is what Martin Scorsese has said of its evocation of a lost time, a lost place. Scorsese’s Little Italy childhood unspooled around the corner: he walked these mean streets. (Cassavetes also got it.) It’s almost heart-stoppingly great, the ever-independent Rogosin’s mix of staged scenes with faces the filmmakers found and straightforward cinéma vérité (largely tripod-bound) never less than thrilling as it courses the streets and bars and flops of this fabled stretch of New York, shadowed by the now-demolished Third Avenue El. (If only the first Mayor Daley hadn’t suppressed filmmaking in Chicago for decades.) It’s like opening a door and walking into another state of mind, another moment as real as the one outside your door right now. Never picturesque, never condescending, it’s a dream of what the best movies can, ought, must be. (It has the black-and-white beauty of the best of Weegee’s work without his recurrent sarcasm.) The restoration was done by Cineteca del Comune di Bologna, drawn from the original negatives at New York’s Anthology Film Archives, only a hop, skip and a jump from the locations on screen. The indispensable Milestone Films distributes. (Milestone was instrumental in the recent rediscovery of Kent Mackenzie’s 1956 “The Exiles,” which captured Los Angeles’ lost Bunker Hill skid row with similar skill.) 66m. (Ray Pride)

“On The Bowery” plays Friday-Tuesday and Thursday at Siskel.