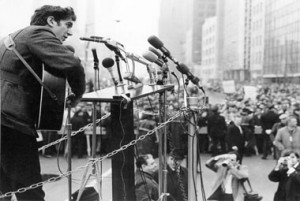 Kenneth Bowser’s bio-doc, “Phil Ochs: There But For Fortune,” opens on the late celebrity folk singer and anti-Vietnam War activist Phil Ochs (“Oaks”) and his weak, earnest voice, and moves into a scrapbooky montage of Greenwich Village and the America of the 1960s and affordable stock footage that prepares fair warning for what’s to come across the next hour-and-a-half or so. A peer of Dylan, boasting floppy bangs and the greatest of intentions, Ochs, as shown here, was instrumental in social change while making music that sounds of its age and not for the ages. Admirably, Bowser presents Ochs as less-than-perfect: “Phil was enough of an egomaniac to take it all personally,” a friend says about the increasingly troubled singer’s reaction to the chaos and political murders that preceded his 1975 suicide. But after watching the film, even in light of the man’s problems with alcohol and his death at 35, likely only the most modest of shrugs will be prompted except from the most nostalgic of elders. The interviews, many archival include Meegan Ochs, Van Dyke Parks, Joan Baez, Pete Seeger, Christopher Hitchens, Abbie Hoffman, Jerry Rubin, Jack Newfield, Lucian Truscott IV, Tom Hayden, the Fugs’ Ed Sanders, Sean Penn. 96m. (Ray Pride)

“Phil Ochs: There But For Fortune” opens Friday at Siskel.