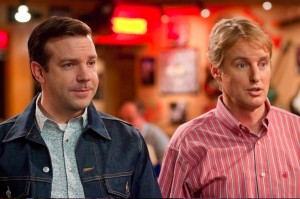 With “Hall Pass,” the Farrelly brothers return to what they do best: goodness, kindness, male cupidity, female patience and abrupt scatology in a generous R-rated package.

Working from the template of a script by Chicago native Pete Jones (“Project Greenlight”), Peter and Bobby Farrelly’s Providence-set comedy works from a simple premise that takes its sweet time setting up. Two essentially nice but quintessentially thick middle-aged ordinary guys (Owen Wilson, Jason Sudeikis), have decent home lives with their wives (Jenna Fischer, Christina Applegate, respectively) but feel a little bit of the itch when another woman catches their eye. (Good gags from them thinking their wives don’t notice and why, and later reveals that the wives do, and how.) The set-up’s sneaky: once the story’s gimmick kicks in—you’ve got a week off from marriage, see how you like them Applebee’s lady patrons—the jokes flow and bounce. It would be a disservice to give away the wealth of keen and foul, but there is one perfectly realized sight gag, in framing, timing and context, that tops even “There’s Something About Mary”‘s hair gel.

Why does it all jell? Everyone’s ridiculous, but just below the surface, no one’s a buffoon. “We didn’t want the husbands to be bad and the wives good or the wives good and, either way around, they all make mistakes,” Peter Farrelly tells me in an interview with Jones. “And we also didn’t want the single guy, Richard Jenkins, just to be a dick. He’s a happy guy! He’s chosen that life, some people choose it. And some are happy, some aren’t. Some married people are happy, some aren’t. But that’s just the way he is. We love that kind of guy. And I know those kinds of guys. He is who he is.”

One reason it works? “It helps getting a guy from Chicago like that, ‘cos he, to me, is the typical Chicago actor. The likeability comes first for them. That’s the thing. There’s something likeable about Chicago people, always has been, as opposed to New Yorkers. Or L.A. people, big city people. Chicago ones! Those are the grounded people. And there’s something about that guy, even though he tries to be the slick guy, he tries to be smooth, there’s a likeability. He can say anything! Like when he talks about Owen’s sister, we don’t hate him for saying that. But it’s like, Oh, that she was banging you at my wedding, that was the problem, (that’s why) you thought something was wrong with her marriage?”

The first night out without their wives, with their poker-party guy pals, they wind up at an Applebee’s that seems unlikely for flirtations. What’s the difference between Applebee’s and Olive Garden? One guy says, “What do you want, hot pussy or all-you-can-eat breadsticks?” Almost too much, but every word in the right place. “Oh, thanks. That’s him. He wrote a great script,” Farrelly turns to Jones. You write “hot pussy” jokes? “No, actually, no…”

“I love, yeah, his delivery on that. I’ll tell you, one of my favorite lines in the movie, they meet the coffee girl in the beginning, they see her, they do their thing, the guy comes in, he gives them shit, the Ed Long character, he’s like, c’mon guys. He says, grow up. He leaves, Jason says [a recurring joke] and Owen says, ‘Aw, he’s a nice guy,’ and Jason, ‘Oh he is a nice guy.’ Like, that’s the kind of shit that I like. It’s the little stuff.”

It’s a guy shrug, not just a guy punchline, it’s like small talk after someone farts. “Yeah, yeah, it’s just… odd. Those guys played off each other very well. They were bouncing off each other.”

Owen’s ordinariness is interesting, he’s not playing superior to the character. “Yeah, y’know, he always plays a slick guy. Big beach blond cool dude, and even when he plays that, there’s a likeability to him. He’s hard not to like. But having known him for years, we were like, you’ve got to play someone suburban, a little more conservative, and he plays it well. He had concerns, ‘Are people going to buy me like that?’ And I said, you are that guy! Owen’s a history buff! He wants to sit down and talk about World War II, Rommel! Y’know? All the time, this is the stuff he talks about. He wants to play chess or backgammon. He’s not a crazy wild man like he’s portrayed in most of his roles.”

Costume design? “Big part of it. Big part of it. When you wear a shirt where the short sleeves go past your elbows, right away, you’re dorky.” Everybody’s clothes are a little bit poking fun, but not poking you in the eye. “Denise Wingate is our costume designer, and she just nailed it. From the moment Owen put the clothes on, he felt like that guy. When you have jeans with pleats? You automatically become, what just happened to me?”

Jones adds, “Shoes with a buckle.”

“It’s this guy,” Farrelly adds, generously, grinning at Jones, “He puts these things in his script.”