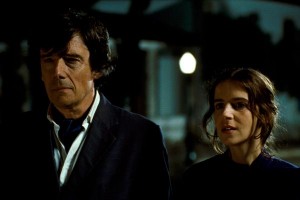 Old Europe still makes new movies like they used to.

The finance of feature films is troubled in every economy around the world, but judging from the always-indispensable European Union Film Festival at the Film Center, offering up sixty-four movies from twenty-four countries, there’s hope still. For the fourteenth annual edition, the entire month of March is given over again to an appealingly curated bunch of films as good as any under any given festival umbrella in Chicago. And I know I’ve said that for several years running—and it feels good to know that it’s not hype to say so.

Even to list the filmmakers whose newest work is shown alongside younger filmmakers sounds like a boast: pick any half dozen. The oh-so-French Catherine Breillat with her “postmodernized” retelling of “The Sleeping Beauty”; Portuguese maxi-minimalist Pedro Costa’s (“Vanda’s Room”) study of the actress-singer Jeanne Balibar as she and a guitarist rehearse a piece of music toward completion; and Spanish wild man Alex de la Iglesia (“The Perfect Crime”) with “The Last Circus,” a story of two rival clowns set during the Spanish Civil War. And: the fine chronicler of Gypsy culture, Tony Gatlif (“Latcho Drom”) with a portrait of a Rom family crossing France during World War II; 101-year-old miniaturist Manoel de Oliveira’s “The Strange Case of Angelica”; plus a new Steve Coogan-Rob Brydon comedy from Michael Winterbottom, the foodie satire, “The Trip.”

There’ll be more to read about in the next few weeks, but here are a few first-week highlights. From Belgium, Hans Herbot’s “Bo” does glum with off-handed authenticity, tracking how a 15-year-old girl’s crush on a young pimp leads to part-time prostitution. Coming from a dumpy, dingy home as green and shadowed as forest mold, the world of clubs and bars and hotels seems fresh, but Ella-June Henrard’s features crease as she tolerates the unfamiliar and unwelcome acts. Herbot’s attention to sound and music is seductive and tense, and the camera often seems like a jittery intruder, with the point-of-view occluded by objects going in and out of focus in the foreground. Things don’t go well, which is the expected bottom line of a story like this. Bulgaria’s “Hunting Down Small Predators,” directed by Tsvetodar Markov, is a black comedy-drama that takes full advantage of weather and unfamiliar streets and courtyards. As a small, atmospheric gangster riff, it has its pleasures, including a displaced recording of “These Boots Are Made For Walking,” some nasty gunplay and a cruelly elegiac ending that strands its young male and female misfits.

From Estonia, Jaak Kilmi’s playful, resourceful documentary “Disco and Atomic War” recalls the maker’s upbringing in the 1980s, when communist propaganda clashed with Finnish television, arrives just across the border from Tallinn, offering swathes of programming like “Dallas,” a parallel universe where everyone is rich. The mix of archive footage, testimony and re-creations is occasionally laugh-out-loud funny while remaining as strange and exotic as sturdy dystopian fiction. Pop culture changes the world one more time, for worse and for better. Stranger still, from Portugal, is “The Portuguese Nun,” Eugène Green’s adaptation of a seventeenth-century novel that also plays with metacinema: a movie is being made inside the movie. Told in extended takes, breaking out in odd jokes and terrible dancing, Green’s work has inspired a younger generation of film writers, including Ryland Walker Knight, to write at length sentences like “An axial cinema that makes order a source of interaction, which is nearly synonymous with interpretation as every conversation seems to negotiate terms as much as exchange information.” (There are extended pauses between lines of dialogue and cuts, which is what I think he’s saying.) Unsparingly goofy as its French actress protagonist (the startlingly present Leonor Baldaque) wanders the streets of Lisbon, “The Portuguese Nun” also boasts drams of the blues of Portugal, fado, with interludes that outstrip Wim Wenders’ splendid passage in “Lisbon Story” with the wrenching performances of one of the best-known groups, Madredeus.

A rapturously pretty yet perverse postcard of Lisbon and a weirdly stylized comedy, idiosyncratically formalist but hardly annoying, “The Portuguese Nun” manages to be both restless in its wanderings yet patient in ladling out comedy and charm. In an email exchange, Green told Ignatiy Vishnevetsky in an e-mail exchange of his eccentric dialogue style, “What interests me is the inner energy that emerges through these sentences from the speaker, but also in those who hear them speak. This is the reason for the systematic shot/reverse-shots, and for the need to show the character before and after every sentence he or she says or hears.” The lovely thing about the work is that it can inspire such sentences and utterances but also have a lavish sense of beauty and provocative notions about duration that is odd but essentially fine observation.

Starts March 4 at the Siskel Film Center. A complete schedule is at siskelfilmcenter.org.