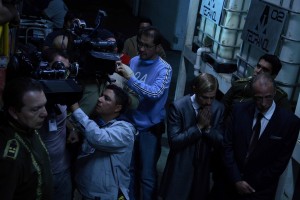 Mexico City, sprawling, overpopulated, polluted, is already a dystopian apparition, and in Francisco Laresgoiti’s “2033,” things have only gotten worse. Renamed “Villaparaiso” (Paradise City) after a military regime topples civilian government and thwarts revolutionaries, the metropolis teems with exploited poor and the enforcers of the rich. Religious cults are banned; pharmaceuticals are used to keep the populace content. While this 2009 production isn’t the equal of “Monsters” in its use of contemporary technology to make effective science fiction on a modest budget, it’s an engaging bit of malarkey. Plus dirigibles. Airships! Distinctly average, it’s a “Blade Runner” wannabe made for very little, a “Children of Men” with few cogent notions, yet still likeable in a B-minus movie kind of way. U.S. premiere. (Ray Pride)