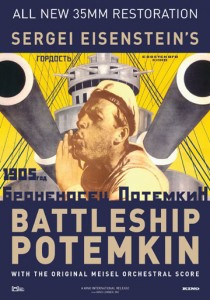 Sergei Eisenstein’s 1925 “Battleship Potemkin” is considered one of the great masterpieces of film editing, demonstrating dynamic montage in bold images that would be recognizable even without montages by the likes of Brian De Palma. The brand-new 35mm restoration restores shots that have been censored or cut in the past eight decades, 146 title cards and the 1926 score by Edmund Meisel. (Even the trailer on YouTube bursts with definition lost in the public-domain 16mm prints shown in film schools for years.) The Odessa Steps sequence, from which De Palma drew the baby carriage bounding down a flight of stairs for “The Untouchables,” remains gripping, despite its documented historical fudging for dramatic effect. The scenes of violence against protesting citizenry by a faltering government (in the form of a naval mutiny) remain timeless as well. 75m. (Ray Pride)

“Battleship Potemkin” opens Friday at the Music Box. The trailer for the restoration is below.