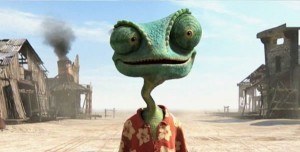 Welcome to Dirt. Paydirt, I’d bet. Gore Verbinski’s first animated feature, “Rango,” promised to be strange-o after early teasers offered cryptic, semi-lysergic glimpses of the journey of a scrawny, tomatillo-headed chameleon voiced by Johnny Depp. But a spaghetti western that’s “Yojimbo” meets “Chinatown,” with splendid, not always slangy references to other movies and art? Highly unlikely but thoroughly enjoyable, and of a more toothsome sort of quirk than the last installments of the Verbinski-Depp “Pirates” trilogy.  A lizard with no name is cast from comfortable terrarium life into the parched desert, and finds his way to a tiny town filled with tiny, parched animal citizenry in the desert. The city’s buildings, sometimes only glimpsed for a flash, are crafted from trash you’d find along the side of the highway: the post office a red-flagged US MAIL home delivery box; a frontier shitter fashioned from a Pepto-Bismol bottle. Depp’s awed-by-the-world vocalizations of Rango’s unstemmable interior monologue, externalized, are inspired throwaways, with lines like “I appreciate the puttanesca myself but I’m not sure a child would” referencing both the pasta source of the movie’s key genre as well as the adult gags that will sail over the heads of children, after the fashion of good, classic Warner Bros. cartoons. What do you do with lines like “I’m actually one of the few men with a maiden name” or “You missin’ yer mama’s mango?” Or “What’s a aquifer?” “Well, for aqua.” Laugh, or wait for the next one that will make you laugh. There are dozens of voices and characters in the tale fashioned from a story by Verbinski and James Ward Byrkit (a longtime illustrator for Verbinski) and John Logan and script by Logan (“The Aviator,” “Gladiator,” Scorsese’s upcoming “Hugo”). The animation by Industrial Light + Magic, with what appear to be superb contributions by visual consultant Roger Deakins (who filled a similar role on “Wall*E”). Stately Monument Valley-styled landscapes provide backdrop for the ranks of propulsive little animal characters. There’s a chorus of small mariachi owls, more like Brechtian doubters than Greek commenters. A sunset evokes “Lawrence of Arabia”; an armadillo prompts Terry Gilliam’s never-made Quixote; a series of falling buildings draws on Buster Keaton’s “Steamboat Bill, Jr.” and the two central figures of “Fear and Loathing in Las Vegas” get a speedy cameo. A huge orange wind-up fish in a dream and a beloved headless-legless Barbie-doll torso suggest a fair acquaintance with Salvador Dali and the vast flat space of his desert canvases. The eco-aware homage to “Chinatown” extends to the mayor of Dirt, a wheelchair-bound, wrinkled-up turtle equal part John Huston on the set of his last features and his role as Noah Cross in “Chinatown.” (Ned Beatty offers purring insinuation as the patriarch.) Water? “The future, Mr. Rango. The future.” (“Chinatown”: “The future, Mr. Gittes. The future.”) The ending suggests the apocalyptic endings of George Miller’s “Babe: Pig in the City” and “Happy Feet”; the visual reveal of the stakes of who controls water in the desert evokes the marvelous conflagration that ends Kiyoshi Kurosawa’s “Charisma.” Did I mention the “Star Wars”-style aerial canyon battles on the backs of bats? I’ve given away hardly a fraction of the bustling canvas. “Must be immersive theater,” a character rightly intones. With the voices of Isla Fisher, Abigail Breslin, Alfred Molina, Stephen Root, Bill Nighy, Timothy Olyphant, Ray Winstone, James Ward Byrkit, Harry Dean Stanton. “Rango” is not in 3-D, and all the better for it: its visual imagination requires no stereoscopic steroids. 107m. (Ray Pride)

The March 3, 2011, print version of this review mistakenly stated that “Rango” was previewed after our press time. We regret the error.