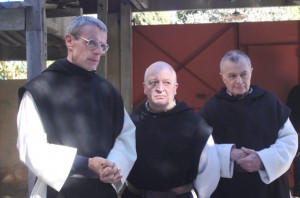 Director Xavier Beauvois and writer Etienne Comar contemplate eight French monks deciding to stay in a mountainous Algerian village as roving Islamicists escalate attacks on unbelievers, as well as erring believers in “Of Gods And Men.” Martyrdom looms. Inspired by a 1996 incident, this testament to faith is graced with delicate tracking shots by Caroline Champetier, a cinematographer often employed by Jean-Luc Godard. Her crystalline imagery reflects the holy clarity the monks ultimately attain. One end title, amidst other factual ones, inaccurately terms their destiny a mystery. The monks run a medical clinic and sell honey at the local market. Their Arabic seems limited to the phrase for “God willing.” They pray and chant together, but do not preach to their Muslim neighbors. Fundamentalists slit the throats of a Croatian construction crew, but there is little theology. Reading material includes Montesquieu, Pascal and the sports pages. A young woman asks an elderly Trappist about love. Later we hear of terrorists slaying two women schoolteachers for speaking to teenagers about love. The soundtrack channels the spirit of place: dog barks and rooster caws, hymns and psalms, a recording of Tchaikovsky’s “Swan Lake” played at dinner, and the thumping din of a military helicopter overhead. With Lambert Wilson, Michael Lonsdale, Olivier Rabourdin, Philippe Laudenbach, Jacques Herlin, Loïc Pichon, Farid Larbi. 120m. (Bill Stamets)

“Of Gods And Men” opens Friday at Landmark Century.