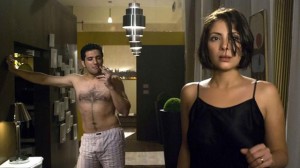 In modern-day Cairo, a female TV-talk-show host stirs controversy when she begins to air the story of women. In Yousry Nasrallah’s “Scheherazade, Tell Me A Story” (Ehky ya Scheherazade), written by popular screenwriter Wahid Hamed, Hebba (Mona Zaki) finds that the stories of oppression of women in contemporary Egypt are without end. Nasrallah’s depiction of cultural misogyny is but one problem in Egypt at this very moment: commentary on the news each day from that country notes how women seem likely to be excluded even in the most revolutionary of potential outcomes. Hebba’s muckraking on behalf of women leads to pressure from her huband Karim (Hassan El Raddad), whose hopes for promotion as an editor at a state-run paper are threatened by her honesty. Then, three women’s histories are told as stories-within-stories, postmodern layering atop the rich tradition of soap opera. A similar story in an American setting would likely prompt the same angry reaction: aren’t these women grateful? (The depiction of an abortion is more blunt than most U. S. movies would ever dare.) Nasrallah’s production notes are clear on what his polished, rich storytelling manages to achieve: “More than 70% of Egyptian households depend on women’s work. Rather than accept this reality, and accordingly accept women as equals, society is constantly pressuring women into showing more submission. Formally, this paradox has allowed me to restore (and subvert) a link with a wonderful tradition in Egyptian Cinema: the superb melodramas and the gorgeous women, who allowed audiences to emote, think and enjoy films for over a hundred years.” The ending, when Hebba becomes the subject of her own story, is both a horror and the logical, loving conclusion. One face represents every other face on the street, in the studio audience, in the local audience that saw “Scheherazade, Tell Me A Story.” 134m. (Ray Pride)

“Scheherazade, Tell Me A Story” opens Friday at Facets.