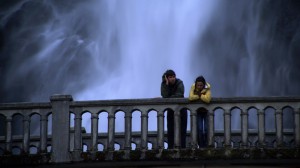 “I think there’s something here at the beginning you might like,” may be the most loving, lovely line I’ve heard in a movie this year, blissful and thrilling in its context, but I won’t tell you why and I can’t tell you how, but when you see Aaron Katz’s third feature, “Cold Weather,” you’ll get it, you’ll understand from moments in, long before those words bubble to the surface.

Opening on a shot of warm, heavy raindrops formed on a glass window against a field of white light surging from behind black clouds, accompanied by Keegan Dewitt’s jangly, playful, inspired score, “Cold Weather” slowly but surely comes into focus. Drips and drops resolve. An apartment courtyard is revealed. Characters enter. A story begins, slightly on the wet-shaggy-dog side.

Doug (stubbled, wry Cris Lankenau) is a forensic science dropout who’s wandered west, back home to Portland after studies and working in a Chicago restaurant kitchen didn’t click, crashing with his older sister Gail (Trieste Kelly Dunn, whose eyelines cut like tender knives). There’s delight in the way Gail deadpan-murmurs the unlikely job her brother has taken: “Ice factory.” This is while they hold tumblers of whiskey, neat: what a tiny, lyrical juxtaposition.

Amiable enough as character study, the story takes on darker but also goofier shades when Doug’s ex-girlfriend Rachel (Robyn Rikoon) disappears as quickly as she appears on the scene. The characters are less slackers than amblers: after lending Sherlock Holmes stories to his co-worker Carlos (Raúl Castillo), Doug is surprised to find that his quiet colleague is both a deejay and a Star Trek aficionado. Working from a series of unlikely but amusingly plausible clues, “Fuckin’ Sherlock Holmes is a pimp,” Carlos observes approvingly. Constructing an IKEA shelf causes problems, PBR and High Life and Swedish Fish and many cups of coffee occur. They’re twentysomething and underemployed: this is a larky movie but never a calculated feat pandering to a perceived audience.

“Cold Weather” is a rich and seductive piece of work, not precisely like his two earlier films, “Dance Party, USA,” which captured the potential for resolution after romantic violence (for which I wrote the DVD liner notes) or “Quiet City,” a low-key, reflective appreciation of Brooklyn. In all three pieces, however disparate their emotional concerns, place matters. It’s a simple, specific, gorgeous world, a mash note to his ordinary hometown. “I grew up in Portland, Oregon where the streets are often wet and the sky is often gray,” Katz writes in the film’s production notes. “The edges of the city are filled with warehouses, underpasses, shipyards, and dilapidated factories. As a kid I imagined mystery lurking around the corners of these places.” The characters are optimists, often-adorable people, really, even under moody, broody skies that are heavy but never violent. The pearl-gray-to-soul-black cloud cover is so low you imagine you could reach up and poke it with your middle finger. The most violent image may be a slow tracking shot toward Doug and Gail on an impulsive day trip, standing on a bridge over a high gorge, with a geysering tumult of waterfall, a thin column, rushing, spraying behind them.

It’s one of many moments with thrillingly punchy sound design. The sound of a small city in the Northwest is ever in the middle ground: a freight’s horn sounds beyond the hills. Streetcars approach. A motel room’s room tone is muffled just so. An Amtrak train enters and exits. Wim Wenders once said the saddest image he knew was an unbroken shot of a horizon line in which a train enters, crosses, then vanishes from frame. Katz’s gambit with just such a shot is one character’s line to another at the bus stop as the train vanishes: “Where you headed?”

The 29-year-old writer-director is also a balladeer of the sodium vapor dusk and night and the offhand, confident smile. (Two topographies, gently drawn.) Ozu would often use three shots of the outside world for his domestic dramas, or “triads” of images: Katz is content with a single, skewed, muzzy image, unexpected tangles of overhead wires, posts, trees. There are R. Crumb drawings of suburban sprawl that capture the same essential banality yet kindly universality. Andrew Reed’s cinematography is some of the most sophisticated I’ve seen using the RED digital camera, making graceful use of color and shadow. (“Winter’s Bone” used the same camera to a wintry blue effect that is equally memorable.) Katz’s casting is sweet as well, choosing faces of elevated ordinariness, his performers having the lived-in weight of contemporary Scandinavian actors about their light yet lived-in touch.

There’s boy’s-own-story silliness in some of the complications, as well as genuine suspense and tension in several scenes (again aided by the sweetly jumpy score). But Katz’s gift, growing as he makes each film, is for more than place and story: it’s for people and gestures and something you can’t buy even on the biggest budget, but earn: mere enchantment.

“Cold Weather” opens Friday at the Music Box. DeWitt’s scores for Katz’s films can be downloaded for free at keegandewitt.com.