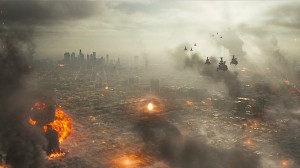 In “Battle: Los Angeles,” a small unit is trapped behind enemy lines in an urban war zone, as in “Black Hawk Down” (2001). As in “Cloverfield” (2008), massively armed aliens block their way out. This classic war film is set in Santa Monica on August 12, 2011. Meteors cloaking war vessels land off the coasts of twenty cities around the world. Invaders move inland, shocking and awing. A military pundit on television calls the attack “textbook.” Columbia Pictures inaccurately overstates its kinetic product as a “platoon” making “the last stand for mankind.” The leaner plot clicks on a smaller scale. A squad of U.S. Marines from Camp Pendleton is ordered to rescue a handful of civilians hiding in a police station, but then it undertakes a second mission of laser-targeting an alien command-and-control center for a missile strike. The day before, Staff Sergeant Nantz (Aaron Eckhart) signed his papers to exit the military after a twenty-year career. Hardly out the door, he’s brought back. Under his command are rookies who heard he made a bad call that got some of his men killed in Iraq. Repairing his reputation is the quiet kernel of the story. Director Jonathan Liebesman and writer Chris Bertolini calibrate details with care. In between the bang-bang and fireballs, there’s just the right interplay of backdrop and personal touches. CNN clips sketch the bigger picture. A protective father places his hand over the eyes of his young son when a local newscast shows aliens zapping Angelenos in the streets. In another fleeting shot, Nantz pauses in a firefight to lace that boy’s shoe. Later, a young marine salutes Nantz for a brave, inventive act: “That was some real John Wayne shit, Staff Sergeant.” A grunt knocks a vocabulary-impaired comrade by parsing “extraterrestrial” as “Canadian.” The usual sci-fi stuff about why they are here and what they want is kept to a minimum. As for what’s at stake, the camera glances over a shoulder to catch a scared marine reading a Bible with his handwritten annotation: “Through Christ Comes Freedom.” This intense fog of war fare, though, hardly sanctifies freedom-fighters as crusaders nor demonizes their foe. This is more like a Homeric lesson in leadership. With Michael Peña, Michelle Rodriguez, Bridget Moynahan, Ramon Rodriguez, Ne-Yo. 116m. (Bill Stamets)