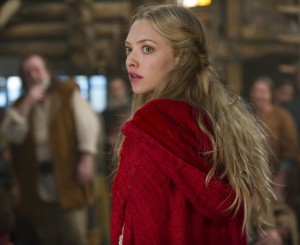 Grimmmmmm: “Red Riding Hood” is little. The latest teen-girl chastity/purity myth trading on sublimated sexuality from director Catherine Hardwicke (“thirteen,” “Twilight”) may be one of the few werewolf movies without blood in its veins. (Worse, spatters and streaks of blood flow black to insure a clean PG-13 rating.) After a choppily edited opening reel or two, where characters seldom speak important dialogue while on screen, but instead with their backs to camera, “Red Riding Hood” settles into its groove, becoming a Zucker brothers movie with the jokes plucked out. Hardwicke, with “Twilight,” is the highest-grossing female director in history, and it’s a blow for equality that she can move from that marker and attempt to become the distaff Rob Cohen. The visual style lacks only for pockets packed with glitter, the simple story stumbling through mist and muzz and smoke. Set-and-CGI bound, in soft focus as if shot in a talc plant, “Red Riding Hood” demonstrates that when anything is possible, everything winds up looking like a Thomas Kinkade flipbook. All of Hardwicke’s interviews citing her visits to Burning Man and figures in the paintings of Bosch and Brueghel are so much air spent in air. Lips, blood, flowing red fabric, symbols of the loss of virginity, the flow of menses, the danger of sex: you wish. Instead, we’re offered “CSI: Moldova,” taking place in the unspecified middle ages, taking place in snowy woods that must be outside of Forks, Washington. (Characters in search of a wolf in a cave repeat, echoing the setting of the “Twilight” tales, “Another fork… another fork.” Forks!) There are one or two shots of Amanda Seyfried, who you’d think was ideal casting, where a smile of naughty anticipation lights up her wide-eyed, pillow-lipped face. (Her character, Valerie, is taunted for being “too pretty, too perfect,” by a peer.) One moment is a brilliant frisson at the end, a thundercrack of wanton desire, another, early on, when she peers from behind a broadax cradled in her arms, accompanied by enchanting dimples and a liquescent electric guitar peal. Mix with memories of Atom Egoyan’s “Chloe,” stir, repeat. A carnal-lite village celebration is scored to a song that has some of the bestial threat of the breathiest, growlingest PJ Harvey, suggesting acrid sweat and ash amid the sonorous clang and rasp. A key shot in that sub-“Matrix Revolutions” community orgy is of Seyfried’s face through flicker-pools of flame: any fucking thing could happen, what happens, eh. Brian Reitzell’s score is of a prettiness and charm eons away from this medieval mishegoss. (His prior scores include “The Virgin Suicides,” “CQ,” “Lost in Translation,” “Stranger Than Fiction,” “The Brothers Bloom” and “Marie Antoinette.”) As a purple-cloaked religious charlatan of a wolf-hunter and pelt-sniffer, Gary Oldman’s facial cabbage is disappointingly banal, a minimalist puffy tuffet of a goatee like Jeff Bridges’ Bad Blake lived under, but at least a bad accent resides there. His role is to pit neighbor against neighbor with paranoia and exaggeration, like a medieval Mike Huckabee. “If you are innocent, you have nothing to fear!” (Man, that’s been a greatest hit for ages.) There’s a problem with the energy level when Oldman doesn’t even get much from the film’s ripest line, “It’s time to put on your harlot’s robe.” (“I know what a woodcutter earns!” is almost as good, as is the exclamation, “In the elephant!”) The boys who tussle for Valerie are cast for maximum prettiness and girly-girlish-appeal, their hair uptossed in Slavic quiffs and sproings of pomade. As the movie grinds on, costumes and sketchy echoes of genres and invocation of games seem less like classical fairytale archetype than a retread of M. Night Shyamalan’s “The Village.” Trainwrecks are prettier. At least the craft of engineers and designers can be discerned in the wreckage. “Red Riding Hood” employs several generations of blondes, from grandma Julie Christie, to mom Virginia Madsen, to director Hardwicke, all the way to Seyfried, who we’ll see more, better of, soon enough. With Lukas Haas in the thankless role of Basil Exposition. 98m. (Ray Pride)