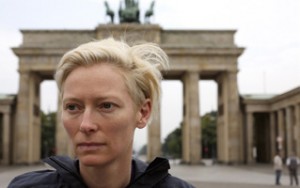 RECOMMENDED
The three most striking films previewed from this week’s offerings at the Siskel Film Center’s European Union Film Festival each have powerful women at their center. Andrea Dunbar was a gifted, troubled playwright from Bradford, England at the time of her death at 29 from a brain hemorrhage that may have been brought on by a lifetime’s drinking and hard living. She was best known for her play, “The Arbor,” as well as the play and film of the ribald, hardheaded “Rita, Sue and Bob Too,” directed by Alan Clarke, who also died early. In the “The Arbor,” director Clio Barnard uses disparate bits to reconstruct the life and talent of Dunbar, including having actors lip-sync recorded interviews with those who knew her and the writer herself in documentary footage. It’s all of a heartbreaking piece. Cynthia Beatt’s “The Invisible Frame” makes poetry from the simplest conceit, repeating an experiment Tilda Swinton had engaged in 1988, with Swinton cycling along the closed Berlin Wall in “Cycling the Frame.” In “The Invisible Frame,” Swinton cycles the landscape of Berlin, on both sides of the vanished 160 kilometers of Wall; literary recitations are complemented by splendid, inventive sound design from the musician Simon Fisher Turner. Tilda is presented as goddess of everydayness, cyclist in the city, seen, unseen, tracing its traces. Danish actress Paprika Steen (“The Celebration”) is devastating in Martin Zandvliet’s “Applause,” playing Thea, a single mother of two sons performing “Who’s Afraid of Virginia Woolf.” (The footage is from an actual production in which Steen starred; one of the boys is Steen’s own.) It’s a big-hearted, bluesy role like John Cassavetes gave his wife Gena Rowlands in movies like “Opening Night.” Thea is a big, grand terrible wreck of a human being and Steen startles with her embrace of all that is large and all that is life-size about her. Moments like when she’s rehearsing to a mirror, “Fucking brilliant. A good mom. I am,” are calibrated with a grand performer’s wryness, ruefulness and love. Zandvliet’s camera stays in close on Steen, hardly flattering, eager to consume. (Ray Pride)
The Fourteenth European Union Film Festival continues through March. Full schedule at siskelfilmcenter.org
Ray Pride