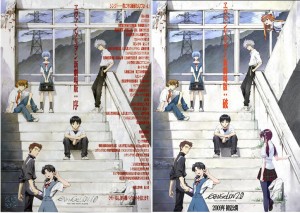 (Ha Evangerion shin gekijôban, 2009) Hideaki Anno’s sequel to 2007’s “Evangelion 1:0,” and the second installment of four planned anime re-imaginings of the 1990s Japanese TV series “Neon Genesis Evangelion,” places huge, destructive angels battling humanoid robots called Evangelions at the center of a saga about an apocalypse striking Japan. Yikes, the timing of the release. (Japanese exhibitors pulled Clint Eastwood’s “Hereafter,” which opens with the destruction and deaths after a tsunami, from release.) On one level, the furious pace of the story of teen-geek heroes and heroines battling to save their nation and the world is dazzling and visually kaleidoscopic, if confounding for a non-aficionado of the source material. In the context of the tragic events of the past week, it gains painful resonance. Then again, any Japanese viewer who knows the history of earthquakes, atom bombs and other forms of destruction loosed upon the islands of their country would have felt the same pull, even before tsunamis and nuclear plant meltdowns. If memory serves, “Evangelion: 2.0” is more pungent and ever so slightly less daffy than its predecessor. 109m. (Ray Pride)

“Evangelion: 2.0 – You Can (Not) Advance” opens Friday at the Music Box.The trailer below offers a brisk slice of “Evangelion: 2.0″‘s style and pace.