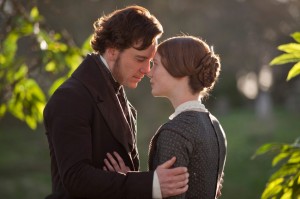 Screenwriter Moira Buffini (“Tamara Drewe”) adapts Charlotte Brontë’s 1847 novel for a nuanced saga of a resolute orphan who survives a sadistic cousin, a cruel aunt and an abusive headmaster. About a decade later, this young woman (Mia Wasikowska, “Alice in Wonderland,” “The Kids Are All Right”) secures a position as the governess in a drafty estate. She can deal with gothic lore about a female vampire haunting the premises, but her tormented master Rochester (Michael Fassbender, “Hunger,” “Fish Tank”) presents her with romantic as well as Human Resources challenges. She looks plain, talks smart and stands fast. Despite a few flashback pathways and Gothic manifestations that fizzle, this “Jane Eyre” excels. Dialogue sounds closer to Brontë’s prose than what’s typically heard in BBC period imports on PBS. (In a minor instance, the novel’s “automaton” is reworded as “machine.”) Cary Joji Fukunaga (“Sin Nombre”) directs with attention to the text and respect for the characters. Cinematographer Adriano Goldman composes daytime shots of estate interiors with a keen eye. Buffini’s screenplay, though, scarcely cues twenty-first century viewers to “the backlash against the novel as a… burning testament of impermissible rage which breathed the revolutionary fire of Chartism and the European revolutions of the late 1840’s” that Welsh novelist Stevie Davies reports. This author of “Unbridled Spirits: Women of the English Revolution 1640-1660” adds: “`Jane Eyre’ is a radical, secular and feminist modern revision of ‘The Pilgrim’s Progress.'” Even without footnotes, this screen version passes with honor. With Judi Dench, Jamie Bell, Sally Hawkins, Simon McBurney, Imogen Poots. 120m. (Bill Stamets)