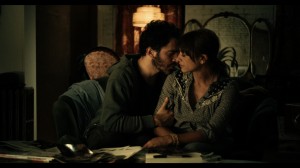 Surprise: lots of looking leads to erotic distraction. A diverting first fiction feature from Dana Adam Shapiro, the co-director and producer of 2005 Oscar-nominated documentary “Murderball,” “Monogamy” has a few kinks to its story of kink, with New York wedding photographer Theo (Chris Messina) seeking gigs on the side via the internet to be a glorified stalker, chronicling their days and doings in voyeuristic images. Not exactly the best diversion for a man with an impending marriage in a few months (to Rashida Jones), and especially after he becomes obsessed with an exhibitionist client (Meital Dohan). The unconvincing contrivance might not have functioned at all without the script’s occasional informed digs at masculine insecurity and the character’s inability to talk aloud about simple problems. Still, the look of the film, shot with the RED digital camera, creates a bleak, threatening mood with its glimpses of the city. The grain and grime are nicely reminiscent of any number of New York-set movies from the 1970s, to the plodding plotting’s advantage. With Zak Orth, Ivan Martin. 99m. (Ray Pride)