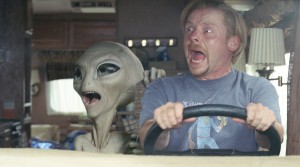 Longtime friends Simon Pegg and Nick Frost (“Spaced,” “Shaun of the Dead” “Hot Fuzz”) write a warm comedy about two friends, Graeme and Clive, who befriend a CGI alien voiced by Seth Rogen. The setup and payoff are pretty akin to those in “Superbad.” Greg Mottola directed that 2007 high-school comedy and now directs a slightly more grown-up version. In both films, females are the real aliens. This time the friends are sci-fi buffs somewhere in their thirties, at least. Instead of a kid compulsively drawing penises, Graeme, a sci-fi illustrator with the last name of Willy, draws a fantasy female with triple tits. Various terrestials and one extraterrestrial concur: “Awesome.” After a stop in San Diego for Comic-Con, the U.K. duo navigates their RV around the West to visit UFO sites. That’s where they pick up Paul, the runaway. He can party hard and bring the dead back to life. This little green man named himself after the Labrador Retriever he crushed when his flying saucer crashed in rural Wyoming back in 1947. All these years Paul has been sequestered in a secret government base. He phoned technical advice to Spielberg for “Close Encounters of the Third Kind” and takes credit for inventing Fox Mulder for “The X-Files.” Now he’s on the run from his handlers. They want to extract his stem cells and dissect his brain, so he hopes to catch a saucer ride home. The film’s weakest part is the pursuit by three feds and a shotgun-toting Christian. The latter thinks his daughter (Kristen Wiig) is a victim of kidnapping. She is only in danger of stealing the film. “Paul” is fixated on straight-male intimacy. The quieter scenes border on touching. The rest do not. Geeks will get all the geeky pop-culture references jammed into the script. I did not. With Jason Bateman, Bill Hader, Joe Lo Truglio, John Carroll Lynch, David Koechner, Sigourney Weaver, Blythe Danner. 104m. (Bill Stamets)