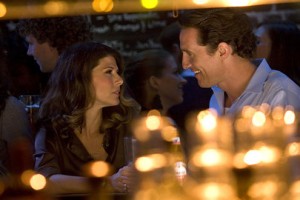 What does a lawyer fear the most? A client who is innocent. That’s what defense atttorney Mick Haller (Matthew McConaughey) was told by his lawyer dad, who passed along a vintage pistol once given to him by a Chicago crook as a keepsake. With a hired driver at the wheel, Haller works from the back seat of a classic black Lincoln Continental with the plates “NTGUILTY.” He takes on a client who looks innocent yet may turn out to get sicko kicks from putting innocent men in prison. John Romano adapts a 2005 novel by Michael Connelly, a former Ft. Lauderdale and Los Angeles crime reporter. Maybe he didn’t make up the dirty tricks that the prosecution and defense pull on each other in “The Lincoln Lawyer.” What stands out about director Brad Furman’s work is a style of no particular note. This well-tooled legal thriller is less about self-conscious nods to noir and B-movie tropes than simply using them for a plot with $400-a-night prostitutes and $550-an-hour lawyers. Although Haller has his own tricks of the trade, his latest case traps him in a con leveraged by attorney-client rules. Louis Roulet, a well-off 26-year-old Beverly Hills real estate agent (Ryan Phillippe) with no priors, claims he was set up by a woman. She is beat up bad. Louis is found on the floor of her apartment with two gay neighbors sitting on him until the cops show up. He claims his victim wants to victimize him and his wealthy mother. Once again, people of a certain class are profiled as perverse psychopaths. Bikers are extra-legal do-gooders. One unoriginal scene is a Saturday afternoon soccer game where the 8-year-old daughter of the divorced Haller will play. With Marisa Tomei, Josh Lucas, John Leguizamo, Frances Fisher, Bob Gunton, William H. Macy, Trace Adkins. 118m. (Bill Stamets)