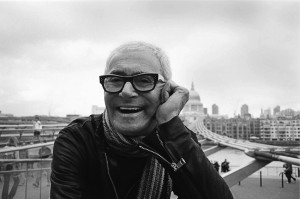 “Vidal Sassoon The Movie” joins the runway of documentaries about fashion-industry celebrities: “Unzipped,” “The September Issue,” “Yves Saint Laurent: His Life and Times,” “Lagerfeld Confidential” and “Valentino: The Last Emperor.” Craig Teper directs and edits an in-house hagiography of the English-born hairstylist with the slogan: “If you don’t look good, we don’t look good.” In the sixties, his Bauhaus-inspired cuts popularized the idea of design for hair. For everywoman, not just models. One talking head compares Sassoon to the key designer of Apple computer products: beyond international branding, the impact of their particular looks raises consciousness about design in general. Teper also shows Sassoon hammering nails in New Orleans, rebuilding housing after Katrina. Among his other causes, unlisted in the film, is The Vidal Sassoon International Center for the Study of Antisemitism at The Hebrew University of Jerusalem. He does talk about his youthful membership in a Jewish militant group that attacked Fascist rallies in postwar London. “Vidal Sassoon The Movie” makes a case that the engaging 83-year-old has had a good career. On camera, he talks himself into believing he’s also a good man leading a good life. That’s quite believable, once you get past the hyperbole, hosannas and human potential clichés. “We think Sassoon, we also think liberation,” states one woman, unbelievably. 87m. (Bill Stamets)

“Vidal Sassoon The Movie” opens Friday at the Music Box. Sassoon will appear at the March 18 opening night.