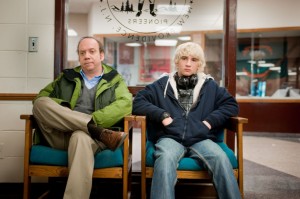 With the sly and understated “Win Win,” writer-director Tom McCarthy’s unstated goal is again to depict how goodness and kindness can come in the most ordinary lives.

In suburban New Jersey, attorney Mike Flaherty (Paul Giamatti) is a lawyer for elderly patients, with a good wife (Amy Ryan), two kids and a practice that’s coming apart in our economy. He’s a high-school wrestling coach as well, sharing duties with office mate Jeffrey Tambor. A questionable business choice volunteering to be guardian to a client, Leo (Burt Young), leads to complications, including a runaway grandson, Kyle, who’s a star athlete. Alex Shaffer, a first-time actor who in fact is a champion wrestler, plays Kyle with gentle assurance as a quiet, bright sullen young guy in bad circumstances. But for Mike? He could sure use him in the high-school program…

McCarthy, whose earlier mixtures of comedy and drama are “The Visitor” and “The Station Agent,” again explores bonds in an unlikely community borne out of affinity more than through blood. While McCarthy has said he’d rather be slightly ordinary than to take us out of his characters’ lives, the dialogue in “Win Win” (co-written with his high-school wrestling buddy Joe Tiboni) is almost as stylized as “True Grit,” in a way, which includes a sophisticated take on swearing. “That’s funny,” McCarthy tells me. At times, you hear a “fricking”‘ or a “fracking,” but these people in this modern moment express themselves in different circumstances through a combination of saying “Fuck, shit, frackin'” and “crap.”

“It was always when and where we are, y’know?” McCarthy says. “Beyond that, I tried not to think about it. I’ll do it. I’ll be with someone who will say, like my brother-in-law will occasionally be at work and say, ‘That f’ing guy.’ F’ing! But you’re out drinking, it’s, ‘That guy is such a fucking douchebag. I can’t stand him.’ Okay, that feels right. But he knows where he is.”

Site-specific. “Exactly. We’re always doing that in this [film], like the ‘shits’ at the beginning, I mean, a lot of that… Sometimes we don’t even realize when we’re saying it and what’s getting passed down and filtered through [to kids].” McCarthy makes a neat refrain of when people say “shit”: it’s always to themselves, a soft tap to the solar plexus with a sudden realization.

“Paul and I were laughing a lot when we did the ADR, you have to do the airplane version, where you remove things. We got one [substitution] in there, ‘Sweet sword of Zeus!’ and the [person] was like ‘Mmmm….’ I think it’s just finding the reality of it, even with [the film’s catchphrase] “Whatever the fuck it takes,” I knew as soon as I do that, I was damning my movie to an ‘R,’ and probably hurting my box office, but it just felt very right. The studio even had a moment with us with that, they’re like ‘Uh, if we lose a few fucks, we can…’ I was like, We have to lose a whole—all of the fucks. Yeah, we can’t do that. To their credit, they were like, ‘Okay.'”

McCarthy gives very good actors room to amble around. Amy Ryan has one moment on her great, expressive face, where she says to the boy as his mother has come to stake a claim, “You know we love you,” and she makes a weird little expression. It’s exquisite. “Yeah, that’s just great,” he agrees. “My scripts are very spare, in fact. I think they’re descriptive and I think they’re accurate, but they’re quite spare. In fact, I think a lot of times. Specifically with that moment, how she plays that, she just made my writing better. Because she handles it in a way, and I don’t even know if she knows she’s doing this, I don’t think it was a conscious choice, ‘cos she handles it the way the character handles that moment. It’s not emotional, it’s practical. It’s, if you’re gonna leave, you’re gonna know something. You’re going to know I love you. Something I love about that moment is how Paul looks at her like, ‘Okay, that was intense.’ He takes her in. You can see his mind working, ‘Oh, this is getting so much more complicated than I ever fuckin’ thought!’ Not worth fifteen hundred bucks a month.”

McCarthy makes quiet use of products as characterization, down to salad dressing. “That Italian dressing is what I always remember my mother doing, I always remember her kind of shaking it, too. Plus, it’s not the small size, it’s the family size. Yeah, totally. Sometimes at Q&As, they’re like, Dunkin’ Donuts, were they a big—and I’m like, I don’t think so. I know the reason Dunkin’ Donuts is in [the movie so much] is because every morning Joe goes to Dunkin’ Donuts before he goes to the office. And he calls it his triangle of death. He’s like, ‘I got home, Dunkin’ Donuts, office, home, Dunkin’ Donuts, office.’ I had to clip that scene because of geometry and pace, [but] you’d see him pulling a chair over [to the older men’s table], what he’d do, he would say something, and he’d pull out this big cruller and take a bite. Which I love, [because] in the scene earlier, he’s shaking the yogurt at his house and taking that to go, so that yogurt’s probably still in his pocket and he’s jumping down on the cruller!”