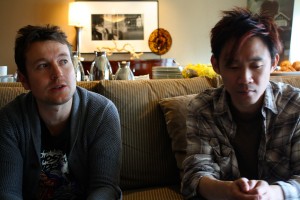 The first “Saw” movie was more clever, cruel clockwork than the kind of hostile horror that later entries in the series became.

After its unexpected success, its creators, the Australian director James Wan and screenwriter Leigh Whannell, then in their late twenties, were directly connected to only one of the sequels. In the years since their original 2003 short and the 2004 feature, Wan has directed only two other films. Their latest, “Insidious,” is a blood-free variation on classic haunted-house stories, with the duo hoping to avoid “false” scares of sudden sounds and leaping cats if at all possible. A young couple (Patrick Wilson, Rose Byrne) moves into a new home, and soon their youngest child falls into a coma and scary happenings fill their nights with fear. They also address another bugbear of the genre: why don’t characters move out of houses possessed by supernatural and otherworldly agents? (There’s a bizarre detour involving a psychic and a pair of sub-“Ghostbusters” investigators that turn “Insidious” into two, two movies in one.)

“We wanted to have the family move!” Wan says with the youthful exuberance he displayed when we first met seven years ago. “That’s the number-one gripe with haunted-house movies. If your house is so haunted, why don’t you move? Even though it is a haunted-house movie, we want to take the subgenre and in a lot of ways break these clichés, or subvert it. One of the things people always complain about is, why don’t they move out of the creepy house they’re living in?”

They move to a sunnier house, I say. “It’s sunny. Yeah,” Whannell says. “That was very calculated as well, to have the second house be much sunnier.”

“The first house,” Wan says, jumping in, “when we were location scouting, I wanted the first house to be a house that when you look at it, without having seen the film, you’d go, of course it’s a haunted house. How can it not be a house that’s haunted!”

A tight schedule, shooting on high-definition video, also meant location shooting. “This was such a low-budget film,” Wan says, “that’s a good thing and also part of the reason why I wanted to keep it that way, so I could pretty much shoot all of the movie on location. The two houses are real houses. I wanted that sense of authenticity so that we could follow the characters from inside the house to outdoors, and from outside, we can look up and see that it’s a real home. Because of the budgetary constraints, I don’t have the money to build a set of one house, let alone two!”

The psychic tries to find answers from “Further.” “I was just thinking of what another realm might be called,” Whannell explains, “and I just thought that would be a cool way to describe—”

Would you do a film a year if it were possible in terms of finance and logistics? When people start out, it seems like it’s what people coming out of film school hope to do, to be productive if not prolific. “I actually haven’t made a film since ‘Death Sentence’ before ‘Insidious,'” Wan says. “And that was like two years ago. It’s all about finding an idea that the two of us are excited about working on—”

“Yeh,” Whannell says, “That’s really the thing, deciding to make a film a year might be a little cart before the horse, because you’re then being creative at gunpoint, you’re trying to meet some deadline rather than saying, I’ll make a film when the time is right and when the idea is right. I don’t think you should rush things if you want to have a lasting legacy. It works for some people, but then others, like P. T. Anderson, he only releases a film… Every five years!”

“It’s not mathematical like that,” Wan adds, “It’s not clockwork like that, it ought to be what inspires you.”

“You get into this industry to avoid the clock-punching job,” Whannell says. “You want to be able to do things organically, but you still want to treat it like a job. I get up every day and go to my computer and I write. And I’m pretty diligent about that, but in terms of when a movie gets made? I don’t want to force anything. I want it to be good.”

“Insidious” opens Friday. In the interview clip below, the sentence-finishing Whannell and Wan talk about their collaboration.