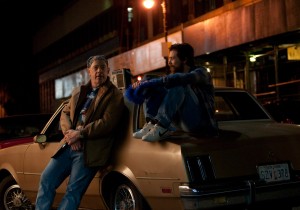 A compulsive punner and recycler of out-of-date advertising catchphrases, Gabriel (Lou Taylor Pucci) is a brain-damaged Grateful Dead fan who cannot appreciate what a Deadhead he really is. A massive tumor erased his post-1968 memory and impairs his ability to form any new memories. The rock music he loved after running away from suburban New York and grooving in the East Village, though, can revive this amnesiac who screenwriters Gwyn Lurie and Gary Marks base on a clinical case study that Dr. Oliver Sacks titled “The Last Hippie.” That “Greg” was hospitalized seven years after leaving home. Sacks reported he turned into an obese, bald, blind Hari Krishna perceived as “blissed” by other cultists. In “The Music Never Stopped” his absence is expanded to eighteen years. Found in the streets, Gabriel is gaunt, sighted, bearded and chantless. The experimental music therapist who taps into his sixties musical memory is played by Julia Ormond. Her character draws on Dr. Concetta Tomaino, whose Institute for Music and Neurologic Function benefited from a fundraiser screening of this touching melodrama of family therapy directed by Jim Kohlberg. The heart of the story is a rebellious teen in a time warp who reconciles with his estranged father, a laid-off Polaroid engineer with figurative and literal heart trouble played by J.K. Simmons. Bing Crosby versus Bob Dylan divide them. The war in Vietnam never ended for Gabriel, who waved a burning U.S. flag at his garage band’s high school gig. Two generations of musical tastes will bond at a tie-dyed Dead concert. A toke to all the rights-holders who donated the flashback soundtrack. With Cara Seymour, Mía Maestro, Tammy Blanchard. 105m. (Bill Stamets)