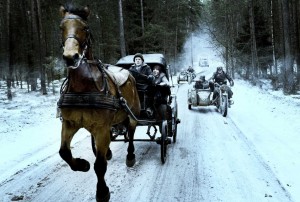 (Oorlogswinter) Little-Boy-Lost in World War II 101, Martin Koolhoven’s smooth “Winter in Wartime” is familiar in its contours as a straightforward coming-of-age story, but it’s lovingly produced and solidly designed, honoring its classical moviemaking traditions. But of course 13-year-old Michiel (Martijn Lakemeier), the village mayor’s son, doesn’t know he’s part of a movie genre, or that it’s the last winter of the Nazi occupation of Holland, and his determination to be part of the Resistance comes to fruition when he aids a wounded, shockingly young English pilot he finds in the woods after seeing a flaming warplane crash from the perspective of a gap in the hoarfrost scoring his bedroom window. The recriminations of a grown-up world reverberate in a sober blue-gray-green world, chilly but always from a humane perspective. The score by Pino Donaggio (“Carrie,” “Dressed to Kill,” “Seed of Chucky”) warms and intermittently sets the film ablaze, especially at moments that tip into melodrama. With Yorick van Wageningen, Jamie Campbell Bower. 103m. (Ray Pride)

“Winter in Wartime” plays at Music Box through Thursday and opens Friday at Pipers and Landmark Renaissance.