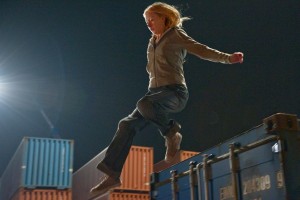 “How long have you been in the forest?”

A small, tight fistful of blunt lines like that in Joe Wright’s outlandish, determined art-house action thriller, “Hanna,” quickly set the heart of the casual admirer of Bruno Bettelheim’s fairytale study “The Uses of Enchantment” to racing. Wright is also bolder than ever with visual flourish.

A motherless child grows up in a rude cabin in far snowy reaches, taught by her father (Eric Bana) to be a ruthless mind, a calculating creature. She’s not amnesiac, she just knows no experience of the larger world: it’s “The Newbourne identity.” “Where do you come from?” “The forest.” The swamp, the primordial ooze, the soup, the shadows: from which all life and fear emerge. Outside the forest, a spy agency in the person of a Texas-twanging Cate Blanchett beckons, threatens.

There aren’t many high-functioning Asperger’s, tongue-in-cheek, Jesus-girl, killer-child thrillers in the market, which makes even the wooziest and blowziest moments of “Hanna” startling. A jarring mix of tones prevails, at one moment in settings that suggest Fassbinder making a “Modesty Blaise” and others, the Euro-oddness of the more gregarious films by Fatih Akin, like “Im Juli” or “Soul Kitchen.” As shot by the gifted Alwin Küchler (“Ratcatcher,” “Sunshine,” “Morvern Callar”) and tethered to the serene, slightly sinister percolation of a score by the Chemical Brothers, the world outside is otherworldly, as if we, the audience, were pitched into as much strangeness as bright young Hanna.

Hanna is Saoirse Ronan, of the plangent, limitless blue pools for eyes, and it’s a magnetic performance by the just-turned-17 actress, the coiled revenger of Wright’s “Atonement.” Action-movie-style catchphrases don’t catch in her throat but sound as “natural,” as chilling as anything else that happens as she learns her origins. She’s a tabula rasa, but also given to unconventional utterances, as in a high-tech holding cell, “Camera obscura… it’s Latin for dark chamber.”

At a public panel in San Francisco last weekend, Wright expressed contempt for other recent action movies with teen and preteen female protagonists: “Bullshit,” he said. “I have a kind of immediate, knee-jerk reaction to such iconography,” he told a WonderCon audience. “I remember when the Spice Girls came out in the mid-nineties and it was all about ‘girl power,’ but one of them was dressed as a baby doll, do you know what I mean? That isn’t girl power, that isn’t feminism. That’s marketing bullshit. And I find it very, very alarming.”

This is a secret-agent movie, but its central character isn’t Bond or Bourne, but more like Bruno S. in Herzog’s “The Enigma of Kaspar Hauser” and “Stroszek.” It’s all unearthly but, weirdly, utterly natural to Hanna, such as her first encounter with music—the strains of a muezzin in Morocco—and a family in a van that sings along to David Bowie’s “Kooks,” with a gossipy, gusty freckle-faced girl her own age, Sophie (Jessica Barden, as jaw-droppingly avid and feral as in “Tamara Drewe”). The movie’s most a-tingle when they’re together: Sophie’s look of dawning, not fawning love, across her wide features looking upon Hanna, and a touch of unexpected tenderness that Wright films as warmth and touch and tingle: something Hanna had not known until in that brightly colored moment of prehensile sexuality. Hanna runs like the wind in her newfound Converse, but the coiling of two pair of beat-up teenage feet is as pungent as a Berlin-set kung fu scene with her father in a minutes-long Steadicam traveling shot from surface to subway.

Wright has a narcotic sense of moment, bringing sensation together with drama. Think of the sensorium of synesthesia in the widely panned “The Soloist”; the mist-haze of spring dawn in “Pride and Prejudice”; the refraction of light through streaked, imperfectly annealed glass in “Atonement.” A 2007 Guardian profile by Jason Solomons surfaces a coursing undercurrent of Wright’s work. “Wright hit the London rave scene in the early Nineties, when he [was] part of an outfit called Vegetable Vision, creating visuals for acts including the Chemical Brothers, Darren Emerson and Andrew Weatherall. ‘I was definitely off my head on Ecstasy for quite a few years… I was up a scaffold, sixty feet above this seething mass of people, matching visuals to music from these amazing DJs. I’d put a slide of raw meat next to maggots, or a shot of police in riot uniform next to Campbell’s tinned soup and I’d flash between the two to the music and the crowd.'” Solomons then gets this from Wright: “[P]roducers who were part of the rave generation themselves are trusting directors influenced by it with bigger budgets now. I know I managed to get that rave feeling into ‘Pride and Prejudice,’ just little suggestions of it in all the pastoral beauty. I love dawn shots, or shots after the rain has stopped, because I always loved staying up all night till dawn, when it all got still and calm. Scenes like that act as emotional recall for me and I’m sure for anyone who was doing Ecstasy back then. [The extended tracking shot on the beach is in ‘Atonement’] like one big rave, a really trippy scene… Then there’s the use of the graphics in the earlier scene when Briony reads the wrong, lewd letter… I managed to get the word ‘c—‘ to fill the screen in old Courier font—we used to do that for Underworld lightshows.” As Solomons concludes, “I can’t believe that Joe has had the chutzpah to get a Best Picture nomination for a film that does indeed flash up the C word three times.”

The C-word of “Hanna”? “Child.” “Sometimes children are bad people, too,” a bad person observes. And a child? Will beat you.