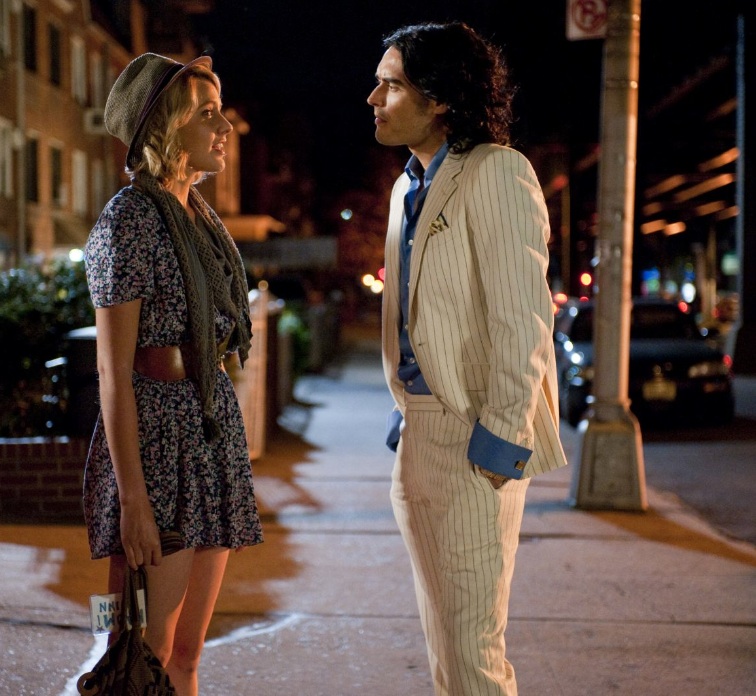 Well, it’s not ghastly. A clueless dither masquerading as a remake, “Arthur,” from television director Jason Winer (“Modern Family”), takes liberties with late writer-director Steve Gordon’s anomalous charmer, largely through casting. In the 1981 original, Dudley Moore managed to be a plutocrat with heart and hope, a drunk and a naïf, a child in the big city. In the script by Peter Baynham (“Brüno,” “Borat”), Arthur Bach is only a cautionary advertisement about the evils of stunted emotional development with lurching nods to political correctness about oligarchical wealth and public drunkenness. The greatest mistake is the central performance by the loping, crouching, bedraggled Russell Brand, to be admired only by the most remunerated or the most cowering of his entourage. While “Arthur” has many scattershot laughs, few are to be credited to Brand’s weak-tea presence. Second is substituting the role of factotum Hobson, which earned John Gielgud an Oscar—”Do you know what I’m going to do? I’m going to take a bath.” “I’ll alert the media.” “It’s what I live for. Perhaps you’d like me to come in there and wash your dick for you, you little shit”—with a sour yet sentimental, nanny turn by Helen Mirren. Naomi Quinn, the love interest played by Liza Minnelli in the original falls to Greta Gerwig, whose wide eyes and quirky smirks as well as pleasingly unconventional delivery, enliven a scene or three. Also, there’s the occasion of the tension of two confident female performance styles in the same frame, largely lost in fluttery, drifting camera moves and crosscutting, but still—Dame Helen Mirren and Greta Gerwig in the same frame! Even with the busy, floating cinematography by Uta Briesewitz, who uses the camera in close-ups the way you’d use a broom on cobwebs up near the ceiling, Gerwig works the college try as a twenty-first-century Diane Keaton. (Call the shooting style “Fumblecore.”) The costume designer has a laugh with Gerwig’s costuming, cocking a snoot at the Queens girl she’s is supposed to be: that’s an awful lot of mid-to-upper thigh peeking from Minnie Mouse dresses and culottes ensembles that would have seemed dated on collegiates when the original film was released thirty years ago. Equally dated is Naomi’s dream project: a cutesy pop-up bookie-wook about the mysteries of Manhattan, “Madhattan: Crazy Secret Stories About New York,” about the love of the Statue of Liberty for the Chrysler Building. There’s a loopy, unproduced screenplay out there called “Daddy Empire,” about a man who’s convinced his parents are the Chrysler Building and the Empire State Building that has the kind of surrealist bite missing from this sack of sad candies. (Let’s not dwell on the fact that Naomi writes her story on her laptop in… Comic Sans. Cruel characterization.) Jennifer Garner plays Arthur’s arranged-marriage fiancée with pluck and fuck-you, but it’s a bitter, manipulative character deserving successive humiliations. Unexamined is whether the script hates her malevolent schemer for its storytelling machinations or the filmmakers’ apparent need to diminish women who fall in the years between ingénue and platonic, barren, man-child-worshipers. Nick Nolte plays the glass-gargling father-in-law-to-be, as either a slab of toxin-engorged beef or a Garbage Pail Kid grown old and gone to sturdy seed. “Arthur” is the kind of movie that has its character crash an AA meeting only to get bored, and turns the labels of its booze bottles backward, as if Early Times and Stolichnaya were reluctant to share their Brand. With the great Luis Guzmán, in an only modestly humiliating role as Arthur’s mumbling chauffeur and a flat John Hodgman, in a humiliating role as a candy store manager. 110m. (Ray Pride)