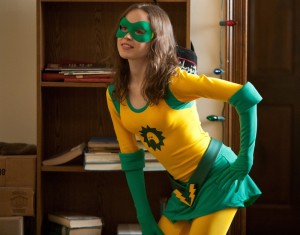 Comedy is tragedy, plus time, and “Super” is night terrors, and slapstick, plus a pipe wrench. James Gunn’s time under the tutelage of Troma Films has not gone astray as a relative low budget enhances the grimy embrace of “Taxi Driver”-psychosis the writer-director brings to his superhero satire. Jody Hill’s “Observe and Report” took the studio route to its subversive re-upholstering of the Scorsese-Schrader-De Niro classic, but crude-and-rude has its own punch. The set-up’s simple: Short-order cook Frank (Rainn Wilson) loses his ex-addict wife (Liv Tyler) to a drug dealer, “Jacques” (Kevin Bacon), and turns to vengeance in the homemade rags of a would-be homegrown superhero, “The Crimson Bolt.” A “life of pain and rejection” leads to outright derangement, with batshit fantasies that include Frank’s live brain braised by a corn dog wielded by a slithering, many-armed apparition. A plan is revealed after “The finger of God touching your brain… the tiniest tip of the finger of God.” His vicious sidekick, “Boltie,” a comic-book-store clerk with serious cos-play turn-ons, is played by the diminutive Ellen Page, whose character is disturbed by the idea of being “a fuckin’ midget.” (Page shows nothing less than joy in the filth coming out of her mouth.) Michael Rooker will never be more disturbing than he was in “Henry: Portrait of a Serial Killer,” but “Super” manages to find a fitting place for him in its bluntly violent world. Gunn’s made a placard comedy that revels in its stew of pain, religious satire and happy-go-yucky gore. 96m. (Ray Pride)