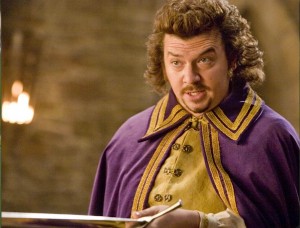 Of all the things I’ve read while trying to figure out what on earth to say about “Your Highness” since seeing it last Wednesday, filmmaker Michael Tully, who’s a friend of writer-director David Gordon Green and observed the making of the stoner comedy, made the most spot-on observation: “I honestly don’t know how anyone could write a review of it. And not because it’s too awful or too great for that. It’s that something this insane mocks the very logic of critical interpretation by its mere existence up there on the big screen… ‘Your Highness’ plays like the crass fantasia of a pair of smart-ass adolescents who get into a riff-contest in after-school detention over the idea of hijacking the set of a proper medieval action film—these smart-ass adolescents being genuine disciples of said genre, that is—and spraying a can of stink bomb all over it.” My version of Tully’s note: screenwriters Danny McBride and Ben Best (“The Foot Fist Way,” 2006) and Green chose a low target and hit it repeatedly. Where some critics are finding vast offense, I see only a movie that knows what it wants to be and goes its merry or not-so-merry way. Green has said a few times that “Your Highness” has its earliest origins in a bar game between himself, Danny McBride and other colleagues reaching back to their film school days in North Carolina: here’s a ridiculous title, now tell me the movie. “Your Highness”? An amalgam of “Beastmaster,” “Krull” and “Dragonslayer,” done with a real budget, with a full-on quest plotline, liberally aided by jokes that 11-year-olds would pass each other in class after loudly passing gas. Plus coveys of “fucks” running under-breath and a buttload of homosexual panic. It’s a world the film fully inhabits. Occasionally the fine cinematographer Tim Orr mounts a helicopter and captures sweeping vistas of the Irish countryside. With McBride, Natalie Portman (feet planted like a fine small tree); Zooey Deschanel (eyes saucer-wide); Justin Theroux (with the most refined adult acting style behind the most absurd set of bad fake teeth); James Franco (“To Be Stoned Or Not To Act Stoned To Seem Stoned: A Dissertation On The Acting Styles Of James Franco, By James Franco); Toby Jones; Charles Dance and Rasmus Hardiker. 102m. (Ray Pride)