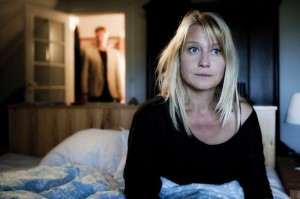 Director Susanne Bier and screenwriter Anders Thomas Jensen frame another moralist melodrama with a foreign counterpoint. The Afghanistan of “Brothers” (2004) and the India of “After the Wedding” (2006) are replaced by an unnamed African country for “In a Better World,” partly shot in Kenya. Her by-now-signature style is here backed by her usual cinematographer Morten Søborg, editor Pernille Bech Christensen and composer Johan Söderqvist. Bier states her film “asks whether our own ‘advanced’ culture is the model for a better world, or whether the same disarray found in lawlessness is lurking beneath the surface of our civilization.” Bier pursues her dire inquiry by observing Christian (William Jøhnk Juels Nielsen) seek vengeful and violent justice. After his mother dies of cancer in London, his father brings this 10-year-old back to Denmark, where his accent earns him taunts. He defends Elias (Markus Rygaard), a victim of a bully who will get bloodied. When Elias’ little brother gets in a tousle with another boy, Elias’ dad, Anton (Mikael Persbrandt), is knocked around by that boy’s macho dad. Christian enlists Elias to get back at “the jerk who hit your dad.” A parallel plotline follows Anton, a doctor in a refugee camp. He sees recurring cases of ghastly knife wounds in pregnant women, and learns that a local headman wagers on the gender of unborn children, then cuts through stomach walls to settle. That much-feared figure appears with his gun-toting thugs. His infected leg is crawling with maggots. Treating this monster tests Anton’s Hippocratic humanism. If schematic at times, Bier offers a highminded look at exemplary manhood through the eyes of sons. (“In a Better World” received the Foreign Language Academy Award.) With Ulrich Thomsen, Trine Dyrholm, Wil Johnson, Anette Støvelbæk, Kim Bodnia, Odiege Matthew. 113m. (Bill Stamets)

“In a Better World” opens Friday at Landmark Century.