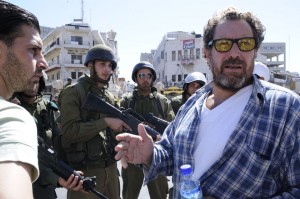 Julian Schnabel’s fifth feature, the multi-generational Middle East narrative “Miral,” is more piecemeal in its composition than the impressionistic washes of imagery in films like “Before Night Falls” (2000) or “The Diving Bell and the Butterfly” (2007), and especially his Lou Reed concert film, “Berlin” (also 2007). What’s tried, for whatever reason, is no longer true. Hiam Abbass (“The Visitor,” “Amreeka,” “Munich,” “Paradise Now”) plays Hind Husseini, a Palestinian woman who opens a girls’ school in Gaza after the 1967 war. Her presence is fierce even as the years and aging makeup pile on. Miral (Freida Pinto, “Slumdog Millionaire”) is a young girl who longs for freedom from war, from oppression, from the jumbled and violent political procession of her time. Time leaps, the camera jumps. From shot to shot, cinematographer Eric Gautier (“Into The Wild,” “Wild Grass,” multiple films for Olivier Assayas and Arnaud Desplechin) brings his fervent eye to Schnabel’s fevered one. There’s little emotional or narrative punch amid the visual frittering. A recurring motif is a shot composed as a glaucous wide angle, in focus at the center, out-of-focus streaks flaring outward from there. Squinting is not a healthy reaction at any movie. Seas and skies and sand draw Schnabel’s eye; the performances less so. Some viewers have found the film’s hopefulness about a resolution to the Israeli-Palestinian conflict to be offensive, but “Miral” is mostly innocuous, with feigned moments of emotion and wooden expository dialogue. (The line “I’ll see you on the frontlines” rings a bit of the traditional envoi of “Next year in Jerusalem.”) Scenes of violence, including torture, whipping and caning are shown obliquely. The most inappropriate choice may be the music cue over a procession at film’s end, Tom Waits’ guttural croon of “Down There by the Train,” with the lyrics “There’s no eye for an eye; there’s no tooth for a tooth; I saw Judas Iscariot carrying John Wilkes Booth; down there by the train; down there by the train.” Cultural mash-up turns meshuggah. A Schnabel lucky charm puts one last damper on “Miral.” Written by and based on the autobiographical novel by Rula Jebreal. With Vanessa Redgrave (“My Palestinian friends!”), Willem Dafoe. 114m.  (Ray Pride)