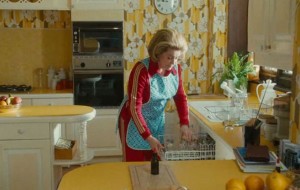 Protean French writer-director François Ozon adapts a French stage hit in the glossy romantic comedy “Potiche” (Trophy Wife), to high comic result. Some of Ozon’s odder genre ventures like “Ricky,” with its otherworldly baby, and the darker dramas like “Under the Sand” and “5×2” find relatively small audiences, but the light “Potiche,” with a goofy central role for Catherine Deneuve in the midst of the flowering of women’s liberation, should amuse many more. The 1980 play (by Pierre Barillet and Jean-Pierre Grédy) about small-town romantic fantasies may have been set in a time of polyester, but surely lacked Ozon’s eyeball-sensing sense of color and costume, louder and more mocking than even his musical “8 Women.” As a younger woman, Deneuve appeared in many movies by Jacques Demy, and while not a musical, “Potiche” plunders that great filmmaker’s elevated sense of fantasy to agreeable affect. It’s journeyman work, but fun while it lasts. With that ever-growing planetary mass known as Gérard Depardieu, the ever-charming Fabrice Luchini, Judith Godrèche, Jérémie Renier, Karin Viard, Évelyne Dandry, Sinead Shannon Roche. 103m. (Ray Pride)