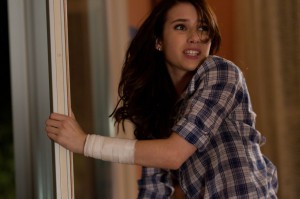 Well, that’s inconvenient. Slouching contentedly through the end credits during the press screening, I abruptly realized that the four wittiest lines in “Scream 4” are all spoilers. (No jokes for you!) That’s a good thing, but it’s good in the same way as any attempt at a plot synopsis. Even without the encouragement of Dimension Films to keep it to a minimum, it seems like a courtesy to let surprises surprise. Let’s shoot for a vague one: reversals and meta-reversals romp through the night streets of Woodsboro, with knowingness atop mega-meta-knowingness a decade past the killings in “Scream 3” when Sidney (Neve Campbell) returns to town on the last stop of her book tour for her self-help book-cum-memoir about the earliest killings and the “Stab” movies-within-movies from the earlier installments. Among the cite-of-hand bits that pop from Kevin Williamson’s screenplay, one of the most apt is “We all live in public.” The implications in Ondi Timoner’s documentary, “We Live In Public,” about a prescient 1990s experiment in surveillance, where residents gave up any right of privacy for public, online display of their lives, resound similarly through the larger shape of Williamson’s script. Craven and Co. address all the damage technology has done to suspense and horror movies, which reaches its apex in a classroom where each teenager’s cell phone bursts into full, mad song, announcing texted gossip of a fresh murder. Wes Craven’s widescreen compositions are largely classical and often elegant, as is the intermittent use of Steadicam; the cinematography is by Peter Deming (“Scream 3,” “Mulholland Drive,” “Lost Highway”). The more cynical turns and chillier implications are swept away by brisk pacing and terse dialogue. Horror references abound, of course; other homages include a take on the ending of “Sunset Boulevard” and a couple of posters for “Rear Window” and “Vertigo,” handsome, wistful signposts of a less-jaded era of cinematic suspense. And, not only does the film cop a twenty-first-century reference to the point-of-view camera of Michael Powell’s “Peeping Tom,” (1960), it even gets a shout-out in the dialogue. The cast is teemingly large, offering ample threat of successive kills, as if we were watching “A Very Special Episode of ‘Stab’!” The threats of violence and actual bursts of gore are restrained if compared to work from Takashi Miike, but rivers do run, and the rivers are red. (A jokey line about “Asian ghost girls” precedes “Grudge”-inspired imagery.) One recurring element that I feel okay in giving away is a “bitch” too far: while most of the “fucks” and “motherfuckers” are judiciously employed, all four of the uses of the “B” word foreground the essential exploitation of the murder of nubile young women in a more chilling fashion than clever dialogue that jokes about the ever-evolving “rules” of the horror genre.  Does it hold the power the filmmakers and producers think it still does? Mostly, it jars. And, gratifyingly, “Scream 4” avoids the dense self-referentiality that seemed almost Calvino-esque in ambition in Craven’s  “New Nightmare” (1994). It’s content to be the best “Scream” since “Scream.” Alison Brie’s turn as a profane and inhuman turn-on-a-dime publicist is a delicious side attraction of “Wow!” With Courteney Cox, David Arquette, Emma Roberts, Marley Shelton, Rory Culkin, Hayden Panettiere, Kristen Bell. 106m. Widescreen. (Ray Pride)