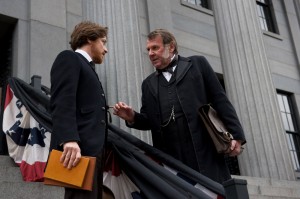 Mary Surratt (Robin Wright) runs a Washington, D.C. boarding house where John Wilkes Booth (Toby Kebbell) and others conspired to kill President Abraham Lincoln (Gerald Bestrom), the Vice President and Secretary of State in 1865. Called before a military tribunal, Surratt is defended by Frederick Aiken (James McAvoy), a Union Army captain. Robert Redford directs “The Conspirator” as a courtroom thriller and civics lesson on the judiciary in times of political fear that are rather like our own. Surratt, a resentful Southern sympathizer, and Aiken, a rookie lawyer who rose to the rank of captain fighting the South for four years, start off distrusting one another. Soon Aiken sacrifices career prospects and friendships to fulfill his duty. Railroading tactics of the prosecutor only incite him to take a higher road. (He also comes to discover his client’s likely innocence.) Screenwriter James D. Solomon and his co-conspirators—the production designer and set decorator—overdo period detail. Clocks tick, floors creak and the streets are thronged with costumed extras flitting this way and that in the background. It’s too much. Still, this dose of history is better for you than another “National Treasure” film smoking with fireballs. Fifty-eight books are listed on the film’s site for optional reading. Here’s a footnote: Joe Ricketts, executive producer of this first effort by The American Film Company, is a member of the family that presently owns the Chicago Cubs. With Alexis Bledel, James Badge Dale, Kevin Kline, Justin Long, Tom Wilkinson, Evan Rachel Wood, Colm Meaney, Danny Huston. 87m. (Bill Stamets)